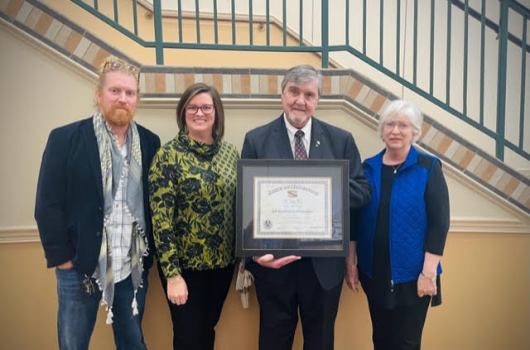 Ken and Karen Lewis were joined by their children Brandon Lewis and Ashley Lewis Drumheller in Natchez for the induction ceremony.

Ken Lewis of Pope, who was Director of Bands at South Panola High School 15 years as part of a career that stretched more than three decades and touched thousands of young musicians’ lives, has been inducted into the Phi Beta Mu Mississippi Bandmasters Hall of Fame.

Lewis, affectionately known as “Sir Lewis” and “Chief”, served as a music educator for over 32 years. His induction took place at the  84th Annual Mississippi Bandmasters Association State Band Clinic in Natchez where he was introduced by one of his former students, Len Killough of Hernando, who hailed him as a mentor and hero.

Many band directors present for the induction have been his students, colleagues, and friends over the course of his illustrious career in music education.

Lewis has also served as music director at Pope Baptist Church for 42 years along with his wife, Karen Martindale Lewis, as pianist.  He attributed his long career and induction into the Hall of Fame “a rich blessing” adding that “The Lord has been his guide throughout his career.”

He graduated from East Tallahatchie High School in Charleston, and attended Northwest Mississippi Community College where he was President of Phi Mu Alpha Sinfonia, and Assistant Director of A Capella Choir.

Lewis then graduated from The University of Mississippi in 1971 with a Bachelor of Music Degree, where he was the Principal Tubist for the U of M. Wind Ensemble and later returned to earn his Master of Music Education Degree.

In January 1971, he became the founding director of the Alcorn Central Band program where he taught until accepting the Director of Bands Position at Baldwyn High School. He went on to serve as Director at W.P. Daniel High School.  During his time there, he served as the President of the Northeast Band Directors Association and served on the board of the Mississippi Bandmasters Association.

In 1981, he accepted the position of Director of Bands at South Panola High School in Batesville, where his bands consistently earned superior ratings in Mississippi, as well as, in festivals in Chicago, Gatlinburg, and St. Louis.

In 1996, Lewis was named Director of Bands at Delta State University where he served until his retirement in 2003.

His years at DSU produced fine marching and concert bands that performed across the state at numerous marching festivals including Gulfport, Meridian, Pearl, Grenada, and a Division II National Championship performance in Florence, AL.

The band’s reputation stood firm as many nationally known Honor Band Clinicians at DSU would recognize the DSU Wind Symphony to rank in the top 10% of the nation.

Upon his retirement, it was noted that over 35 of the active band directors in the state of Mississippi had been members of Mr. Lewis’ band at Delta State.  “Watching former students succeed as band directors and professionals brings such great happiness and honor. I am so very proud of them,” said Lewis.