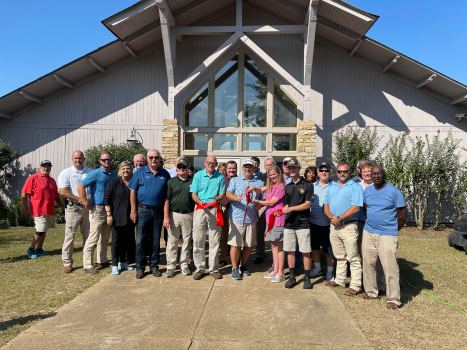 Mallard Pointe golf course at John W. Kyle State Park in Sardis has been up and running this year, and has some exciting plans for the holidays.

There will also be Christmas specials at their fully stocked pro shop, for golf equipment, clothing, and other frequently sought items.

Although back in its heyday, Mallard Pointe was on the Top-10 list of new courses to play in Golf Digest magazine, it went to disrepair in recent years, and the State of Mississippi Department of Wildlife, Fisheries, and Parks, chose to not renew the contract of operation with the former managers.

New president and manager, Chris Sparks, is enthusiastic about the enduring uphill progress of the 18-hole course, now in very playable condition.  Although, he said the biggest challenge has been letting folks know that they are no longer closed, and have painstakingly utilized what resources have been made available for the numerous renovations.

“We still do get a lot of people going, ‘We didn’t even know y’all were back open,’” said Sparks, “although we have been running radio ads.”  He also said that they’re “currently trying to figure out other avenues to go down,” since getting the word out has required a little more effort than anticipated.

Although about 400-500 golfers per month have been coming to Mallard Pointe, Sparks said things have recently been a little slower due to inclement weather, hunting season, and football, but he expects things to pick up as the anticipated Winter Scramble approaches.

Sparks was given a five year lease, and when he took possession of the course and grounds the grass was 16-inches tall in places, and some of the greens had been much neglected.

After many strenuous months of seeking to obtain basic necessities such as tractors and sprayers, and the dozens of golf carts needed–partly challenged by the supply chain issues of recent times–Sparks feels that things are on the up-and-up.

He has also expressed his longterm plans to bring back the Academy Course–a nine-hole practice course with shorter distances designed for golf instruction and for beginners wanting to learn the game.

Although the State wasn’t particularly reluctant to close the golf course, built on 150 acres next to the lake more than two decades ago, State Sen. Nicole Boyd, Joe Azar and the Panola Partnership office pushed hard for the DWFP to make proposals for operation of the course, and its two rental villas.

Sparks urges potential guests to visit their newly constructed website at golfmallardpointe.com, or to call the pro shop for tee times at its new phone number 546-4172.