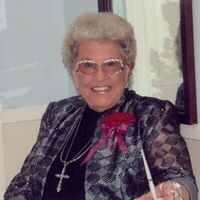 Paula Louise Helms Whatley, age 96, passed away Friday morning, October 21, 2022, at Diversicare in Batesville, MS.
Funeral services were held at 2:00 P.M. on Sunday, October 23, 2022, at Crowder Baptist Church with the interment to follow at Crowder Cemetery.
Born August 22, 1926, in Darling, MS to the late Joe Willie (Bill) and Esther Helms. She was a graduate of Crowder High School, Delta State University, where she received her Bachelor’s Degree and the University of Mississippi, where she received a Master’s in Education and Reading. After teaching first grade for a number of years, she worked as a Reading Supervisor for Quitman County Schools. After 30 years of service in the field of education she retired. From 1986-2002 she worked as a tour guide for Travel Services International in Jackson, MS. She later worked as a tour guide for Coach U.S.A. in Memphis, TN.
In addition to her parents, Paula was preceded in death by her husband, Earl Whatley; sister, Annie Rico, brothers, Billy and Norman Helms.
She is survived by her sister, Cookie Brewer; her brother-in-law Levi Brewer; her nephew Cricket Brewer (Cindy); niece, Michelle Gee (Don), their children whom she considered to be her grandchildren, Robin Jackson (Markie), Holden Brewer, Kaitye Grace and Whitten Jackson, Casey, Magen, Carter and Levi Gee. She is also survived by a host of other nieces and nephews.
In lieu of flowers, memorial donations can be made to the Crowder Baptist Church.
Wells Funeral Home in Batesville, MS was honored to serve the family of Ms. Whatley.