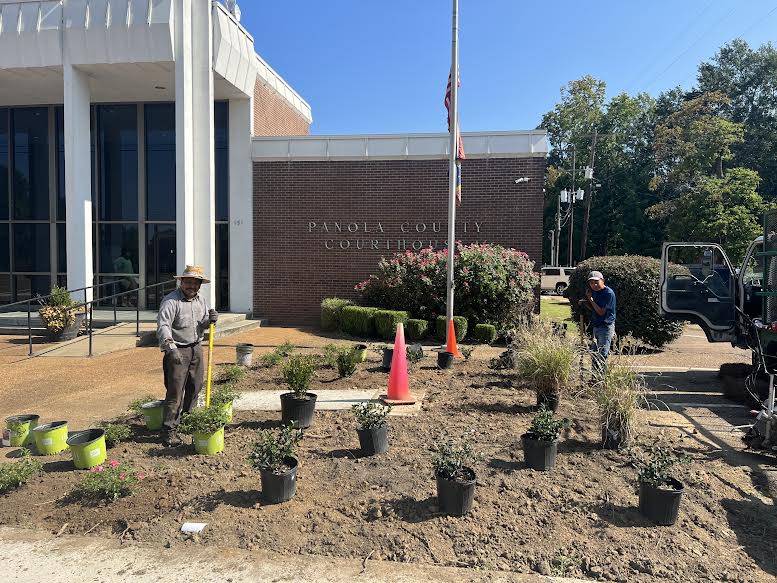 Employees of Herron Landscape were busy last week preparing an area in front of the Batesville Courthouse that will soon hold the Panola County Law Enforcement Memorial, a monument dedicated to the memory of the four officers killed in the line of duty in the county.

Sheriff Shane Phelps said an early goal in his administration was the erection of a monument to honor the lives and services of the four men recorded as making the ultimate sacrifice while serving in an official capacity.

“This was something that was on our mind early, but Covid got in the way,” Phelps said. “We sat down early this year and decided we had to get this thing done because these officers deserve our respect and recognition. It needs to be a reminder to all of us in Panola County what these officers gave up because they were wearing a badge. They gave us their lives.”

The dedication of the memorial will be next Friday, Sept. 30, at 10 a.m., and will coincide with the 34th anniversary of the death of Deputy Joe Cosby, who was killed in 1988. Many elected officials are scheduled to attend, and retired Mississippi Supreme Court Justice George Carlson will deliver the keynote address.

Phelps said the county is fortunate to have a relatively small number of officer fatalities in comparison to others, but said “four is four too many.”

There have been 177 officers killed in the line of duty in the United States this year (as of Tuesday) and 1,771 in the last five years. Line of duty deaths of all time in the country are 25,969, according to the Officer Down Memorial Page on the internet.

The names that will be inscribed on the monument for Panola County are:

Town Marshall Lige Denman, Crowder Police Department, killed Wednesday, Sept. 13, 1939. Town Marshall Denman was shot and killed with his own service weapon while attempting to put a prisoner in a cell.

The prisoner was able to disarm him and shot him four times in an attempt to escape. Marshall Denman managed to draw a second pistol from his pocket and shot and seriously wounded the man, who was captured by a posse a short time later.

Marshal Denman had served with the Crowder Police Department for 12 years. He was 58 years old.

Officer Parrish was shot and killed while making a traffic stop.

Officer Parrish had served with the Crenshaw Police Department for one year and was survived by his wife and two children. He was 40 years old.

Deputy Cosby was shot and killed while transporting a prisoner from the jail.

He had picked up the prisoner from the Tunica County jail and was transporting him to the Panola County Courthouse for a court appearance. The prisoner was riding in the front seat of the patrol car and started struggling with Deputy Cosby as they drove on U.S. 51 just north of Batesville.

The prisoner was able to gain control of Deputy Cosby’s weapon and shot him. A passerby located Deputy Cosby in his patrol car in a cotton field 20 yards off the highway. The man was convicted of murder and sentenced to three life sentences.

Deputy Cosby had served with the Sheriff’s Office for 13 years and was survived by his wife and two daughters. He was 47 years old.

Constable Hawkins was killed when his vehicle was struck by a stolen pickup truck being pursued by other officers around 2:30 p.m.

The pursuit started in Tallahatchie County when deputies attempted to stop the stolen vehicle that was occupied by two juvenile offenders. Constable Hawkins was responding to assist in the pursuit when the vehicle struck his car at a high rate of speed at the intersection of Highways 35 and 6 causing instant fatal injuries.

Both juveniles were taken into custody and charged as adults with felony murder. Both are serving sentences.

Constable Hawkins had served in law enforcement for 29 years. His son, Wesley Hawkins, is a captain with the Batesville Police Department and was one of the first officers on the scene following the crash.

The back side of the monument will be inscribed with the Bible verse found in Matthew 5:9. It says, “Blessed are the peacemakers for they shall be called the children of God.”

Phelps said everyone is invited to attend the dedication ceremony.