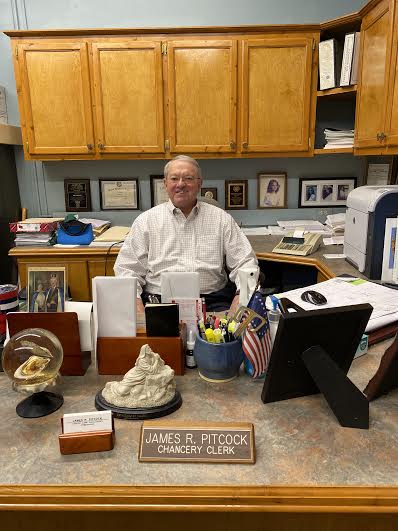 Panola County Chancery Clerk Jim Pitcock, who has held the office for 19 years, submitted a letter of resignation to the Board of Supervisors at Monday’s regular meeting at the Batesville Courthouse.

Pitcock told supervisors he will retire from the post he has held since 2004 on the last day of September, and asked the board to name his Deputy Clerk Katie Ragon, who also serves as Payroll and Insurance Clerk. She will serve the remainder of his term, which will end Dec. 31, 2023.

Supervisors approved the request, and Ragon will become the Chancery Clerk on Oct. 1. In a letter to the citizens of Panola County sent to The Panolian shortly after the Monday meeting, Pitcock thanked people for their support, and assured them his office will continue to operate with the same professionalism that marked his tenure as clerk.

The full text of the letter is included at the end of this article.

Pitcock’s announcement stunned many, especially those who give attention to county elections. Political observers had already begun to speculate who, and how many, might seek the Chancery Clerk seat in the 2023 election when the longtime clerk was thought to be retiring from public service.

Pitcock was first elected in the 2003 election when eight candidates were on the ballot following the retirement of another long-serving Chancery Clerk, the late Sally Fisher. Pitcock emerged as the winner of that race and handily won four more elections, the closest margin being more than 250 votes.

Ragon will serve the remainder of Pitcock’s term through the end of next year. County elections will be held again in 2023 and candidates for that office, and other county posts, can begin the qualifying process early next year.

Had Pitcock retired earlier this year the county would have been forced to have a special election, a cost to taxpayers the clerk wanted to avoid. Instead, the Chancery Clerk position will be on the regular primary and general election ballots next year.

Board of Supervisors President Cole Flint said Pitcock’s resignation was somewhat of a shock to the board, but that county business will continue as normal because of his efforts to leave the office on solid footing, with little transition pain.

“Mr. Jim is a valuable asset to this county and the people of Panola have been blessed to have him in that office for all these years,” Flint said. “Chancery Clerk is very important in county government and I was thankful that he spent so much time training Katie to take his place next month. If Mr. Jim says she is ready then she is ready.”

The letter Pitcock penned for the people of Panola County follows:

“To the good people of Panola County, I want to thank you from the bottom of my heart for allowing me to serve as your Chancery Clerk for the past 19 years.

There have been many challenges along the way but countless blessings far exceed them. You have been so gracious, kind, and appreciative throughout the years. Many of you have personally offered words of appreciation to me that encouraged me to strive to make things even better for the citizens of the county. We have made many technological improvements resulting in a more user friendly, efficient and accessible office to you, the taxpayer, and

With that being said, after much soul searching and prayer, I want to inform you that I am retiring effective September 30, 2022. Knowing that this moment was fast approaching, I have been training my Deputy Chancery Clerk, Katie Ragon, who also serves as county Payroll and Insurance Clerk to fulfill my unexpired term. I have asked the supervisors to appoint her to my position and they have graciously agreed to do so upon my vacating the office on September 30 at midnight.

The people of Panola County are blessed to have someone of Katie’s expertise available to assume the role of Chancery Clerk as well as Payroll and Insurance clerk. I have no doubt that Katie will do an excellent job and is more than qualified to take over the office of Chancery Clerk.

I have taken care of each detail in order to make sure that the people of Panola County will receive the same professional service as in the past. I am not going to abandon the good people of this county and will be here to oversee the transition at NO COST to Panola County.

I will make sure that the position to which I was elected operates efficiently, smoothly, and professionally. You will still receive the same warm and courteous service that you have always received. It is my prayer that you will give Katie and staff the same support that you have always

given me. l promise that Katie and this staff will not disappoint you. Katie will be the same person that gets you paid correctly, on time, and oversees all of your insurance needs.

Serving as Chancery Clerk of Panola County for five terms greatly exceeds all of my expectations and wildest dreams.

Trusting me with the enormous responsibility of the Chancery Clerk’s office is appreciated more than words could ever express.

Linda and I love the citizens of this county and appreciate the opportunity to serve you. I pray that I have blessed you as much as you have blessed Linda and me.

May God Bless, protect, and guide the people of Panola County.”