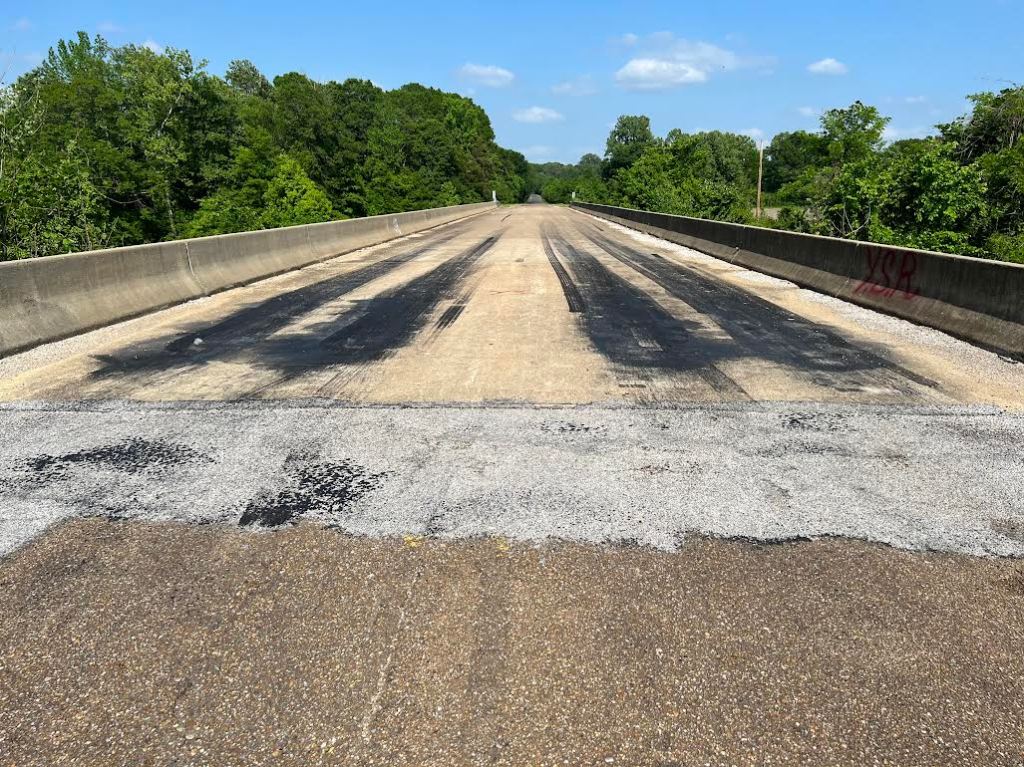 This bridge on Ballentine Road in north Panola County is often used as a starting place for illegal street racing. Drivers use accelerants to light fires on their vehicle’s tires to make them sticky and able to better grip the road when racing.

Panola County will install a series of temporary speed bumps on both sides of bridges located on Ballentine and Compress Roads in an effort to stop the illegal street racing that supervisors say has become a danger to the general public.

Although the roads most used for drag racing are in the rural parts of the county – generally in the north – the activity is dangerous for the few residents along the flat stretches favored by the racers.

Reports of situations when drag racers basically took over sections of road while racing, keeping others drivers from safely passing, was also a factor in the decision to install speed bumps.

Larry Britt of Britt Engineering made the recommendation to the Board of Supervisors at their regular meeting Monday at the Batesville Courthouse. He and Road Manager Bruce Cook visited several reported racing sites in the county last week.

Supervisors had asked them to study the possibility of cutting grooves in the concrete bridges to disrupt the “burnout spots” for the racers, but Britt said making alterations to the bridge, overseen by the State Department of Transportation, would not be prudent.

“We can put speed bumps on either side and if they are taking off on the bridge, which they are according to what we witnessed when we looked at the bridges, then when they take off east and hit those speed bumps I don’t think they will be racing much after that,” Britt said.

“We will have to put signs up notifying the traveling public and warning them that speed bumps are ahead,” he said.

Supervisor James Birge asked Britt to consider using speed bumps that are wider and potentially cause less damage to vehicles when drivers fail to slow, but other supervisors, weary of hearing complaints about racing and general speeding, were inclined to agree with Supervisor Chad Weaver about the matter.

“If you are going to put one up it needs to be one that’s going to take a front end or not at all,” Weaver said.

In other county road updates, Britt said state road funds may become available for Davis Chapel Rd., a project the supervisors have wanted to start for several years.  Davis Chapel runs from Hwy. 51, just south of the Sardis town limits, to the McIvor Shooting Facility.

Supervisors want to repair the road, which is among the worst paved roads in the county at portions, because it leads to the shooting facility and is traveled by visitors from across the nation who want to shoot and compete at the state-of-the-art facility.

Davis Chapel repairs would be costly, but Britt said any help the county could get would help in the overall project.

Cook’s regular road report for April showed the Road Department currently has 24 open requests and 10 were closed last month. He said with materials and labor, the Road Department spent $298,048.16 in April, the bulk of which was in District 4 where crews spent weeks cleaning debris from a tornado that hit Panola County on Wednesday, March 30.

Photo:  This bridge on Ballentine Road in north Panola County is often used as a starting place for illegal street racing. Drivers use accelerants to light fires on their vehicle’s tires to make them sticky and able to better grip the road when racing.