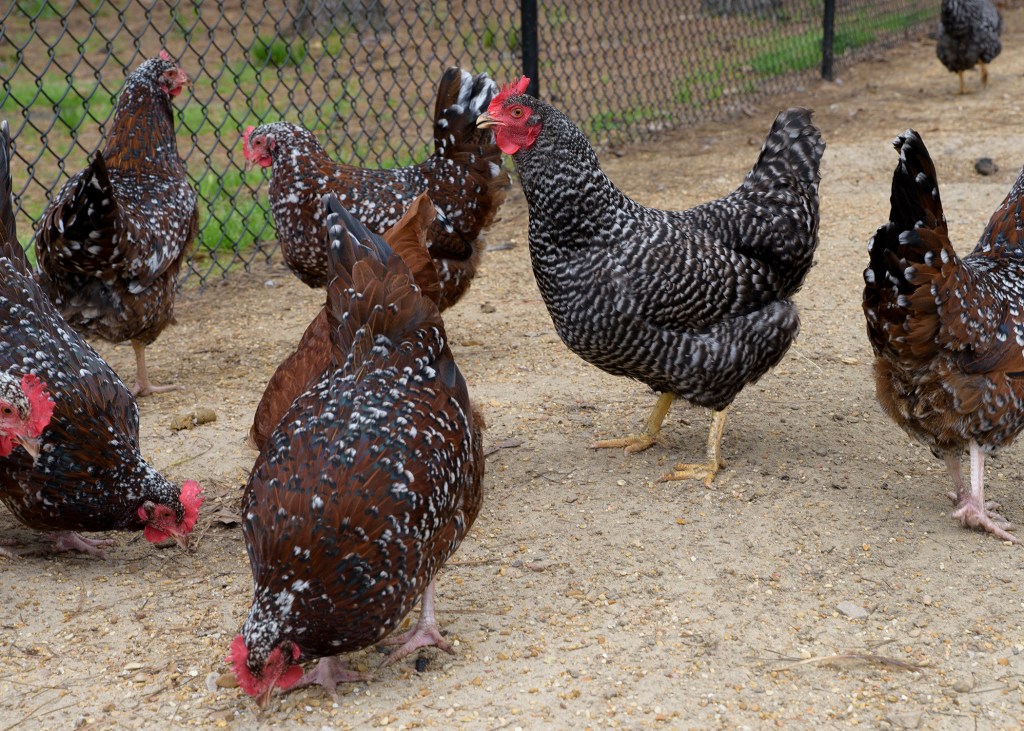 BACKYARD -- Although there have been no reported cases of highly pathogenic avian influenza in the state to date, Mississippi producers and backyard flock owners must remain vigilant to stay disease free. (Photo by MSU Extension Service/Kevin Hudson) Alt text -- A handful of chickens feeds inside a fenced enclosure. ###

Keeping buffalo wings on menus is a supply chain issue that goes all the way back to procedures farm workers follow to protect the health of commercially grown chickens.

According to the Centers for Disease Control and Prevention, avian influenza or bird flu is a disease caused by viruses naturally spread among wild aquatic birds worldwide. Although it rarely affects humans, it can infect backyard chicken flocks and commercial poultry operations. When bird flu is diagnosed, the usual response is eradication of the entire flock and surveillance of nearby flocks.

National Public Radio reports that a highly pathogenic bird flu virus has spread to at least 24 states less than two months after the first outbreak was reported in a commercial flock. Nearly 23 million birds have died in the worst U.S. outbreak of the avian flu since 2015, when more than 50 million birds died. Deaths come both from the disease itself and from flocks being culled to try to stop the spread of the disease.

This outbreak is driving up consumer egg and chicken meat prices, which  had already been rising due to inflation like many other costs.

Jonathan Moon, research coordinator for the Mississippi State University Department of Poultry Science and researcher with the Mississippi Agricultural and Forestry Experiment Station, said HPAI has not yet been detected in Mississippi.

“An HPAI case was confirmed in commercial broiler flocks in southwest Kentucky in February and southeast Missouri in March,” Moon said. “Avian influenza has been detected in wild birds in north Alabama and northwest Tennessee.”

Despite the fact that there have been no reported HPAI cases in the state to date, Moon said, Mississippi producers and backyard flock owners must remain vigilant to avoid avian influenza.

In commercial poultry production, that vigilance means companies must implement and adhere to a strict biosecurity program.

“Poultry companies in Mississippi participate in the National Poultry Improvement Plan, where there are standards for biosecurity programs,” Moon said. “Most producers have different levels of biosecurity and will add precautions when a disease becomes geographically close to their operation.”

Jessica Wells, MSU Extension Service poultry specialist, said that commercial poultry producers have their livelihoods threatened in the battle against avian influenza, but backyard flock owners must also be diligent to keep the state disease-free.

“Good biosecurity practices are important regardless of whether or not we are in a heightened situation,” Wells said. “Backyard flock owners must understand that this disease must be taken seriously, and even simple biosecurity measures could prevent our state from having a catastrophic event.”

These biosecurity measures include keeping backyard flocks fenced or in secluded areas away from other fowl. Change clothes and shoes after tending a personal flock and before visiting another flock.

“Do not allow traffic into your poultry coop, including people and wild animals,” she said. “It is very important to keep all wild birds away from your domestic flock, as these birds can carry the disease without showing any signs.”

In the current state of heightened security against avian influenza, producers should purchase birds only from registered flocks. She urged backyard flock owners to avoid swapping poultry.

“While losing your flock to this disease can be detrimental to you, the devastation it can cause our state industry could have large ramifications to us as consumers, as well,” Wells said. “This disease needs to be taken seriously, which means backyard flock owners should follow all of these simple biosecurity measures.”

The MSU Department of Poultry Science is available to offer support for both commercial poultry producers and owners of backyard flocks.

Moon said commercial producers contact their integrator service technician if they suspect their birds are sick. Backyard growers who think there is a possibility their flock is contaminated can contact their local veterinarian or Extension agent, the Mississippi Veterinary Research and Diagnostic Laboratory at 601-420-4700, the Mississippi Board of Animal Health at 601-359-1170, or the animal disaster hotline at 1-888-722-3106.