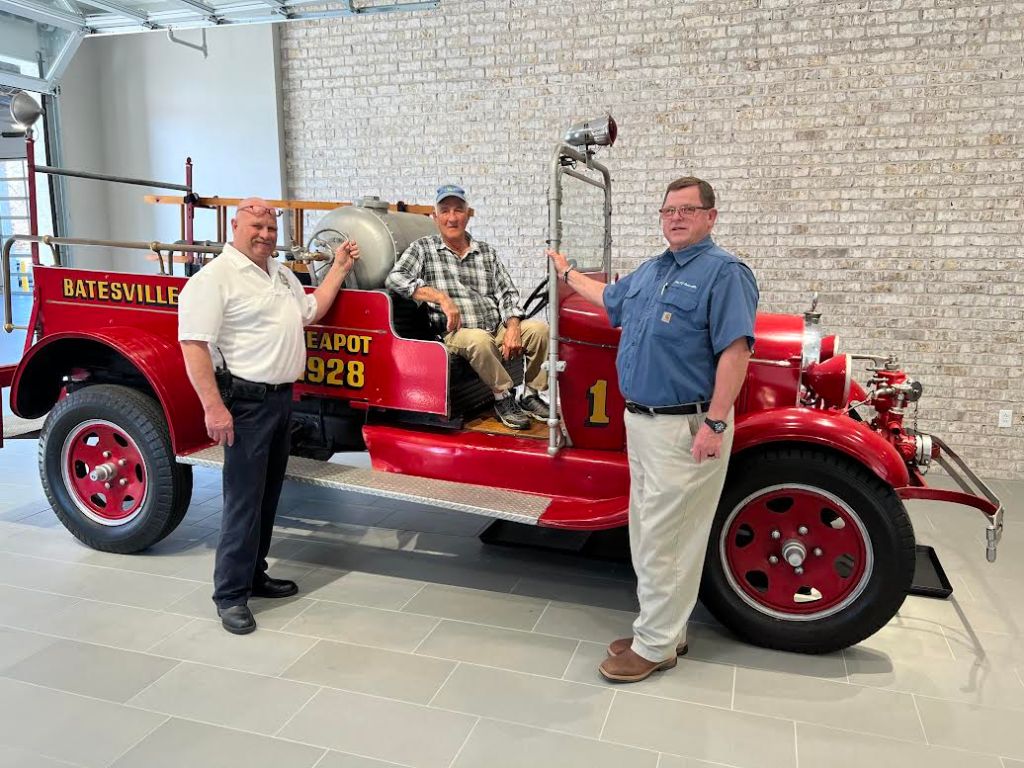 The Teapot, the Batesville Fire Department’s antique engine and one of the first to fight fires in the city, was moved to its new home on display at the just completed fire station on Van Voris St. last Thursday.

Bobby York drove the truck, a 1928 chemical truck that was outfitted with a pump and 200 feet of hose in the late 1920s. He is the oldest member of the Batesville Fire Department and has been the caretaker of the beloved Teapot for decades.

Almost every school child in Batesville over the last 90 years has seen the Teapot in tours of the downtown station and in Christmas parades.

Former issues of The Panolian recorded how the truck got its name.

There was a fire in Como in a two-story building and the Batesville volunteer unit was called to help. When they arrived at the burning building they took the hose, which was attached to the 100-gallon tank on the small truck, and went into the burning building “going from one place to the other and dousing the flames.”

After all the fires had been extinguished, a Como resident who had observed his action, walked up to the fire chief and said, “I’ll be durn, that ‘Teapot’ did all the work.” Thus was named the first motorized equipment of the Batesville Volunteer Fire Department.

The little truck was out of commission at one time during World War II, but has put out many structures fires over the years.

In the same article, Roy Harris, one of the volunteer firemen at the time, recalled a fire in the old Leigh home, a two-and-a-half structure facing the railroad, southwest of the Square.

Harris lived in the house at the time it caught fire. While on a fire department ladder fighting the fire, he elected to toss the hose to another resident of the house who had more access to the flames than was possible from the ladder.

Harris threw the hose at the man who caught it. But the ladder leg broke and Harris fell to the ground. He said he was “stove” up for several days, but X-rays revealed no broken bones.

He dropped a hint at suing the city and quickly the board voted to pay Chief Mal Anderson $5 a month and Assistant Chief Harris $3 a month for their services.

Fire Chief Tim Taylor and Public Works Director David Karr were on hand at the new fire station on Van Voris St., to oversee the moving of the Teapot, one of the city’s first motorized pieces of fire fighting equipment, where it will be displayed. Batesville’s longest serving fireman, Bobby York, drove the Teapot.