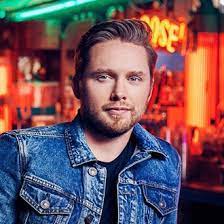 Jameson Rodgers will headline Springfest 2022, marking the return of the Batesville native for his biggest show in his hometown since he established himself as one of the future stars of country music with No. 1 songs and a major record contract with the Columbia Nashville label.

Springfest is set for May 20-21 and Rodgers will close the music festival with a Saturday evening performance. Batesville will be one of many stops for Rodgers as he promotes his debut album Bet You’re From a Small Town, described as a gritty, country music masterpiece that most certainly will have the soft-spoken yet edgy country traditionalist landing in superstar territory.

“This is a dream come true,” Rodgers said. “I can remember a time, not so long ago, when none of this was going on and it seemed like it would never happen. I mean, things like this don’t happen to guys like me.”

Batesville Main Street director Mamie Avery made the announcement of Rodgers’ return to Batesville last week. She said a full musical line-up has been compiled and the bands and performers slated for Springfest will be released soon.

Avery met with the Batesville Mayor and Board of Aldermen and the Panola County Board of Supervisors at their respective meetings earlier this month, outlining some of the details for this year’s Springfest, expected to be the largest in the event’s history.

The Main Street office asked the city aldermen for extra funds for this year’s Springfest because of the large crowd expected to turn out to see Rodgers perform. Additional security and other measures will be necessary for a successful event, Avery said.

The supervisors were asked to close the Batesville Courthouse early on Friday, May 20, but told Avery that wasn’t possible by state law. They did give permission for the courthouse parking lot to be used for parking during the festival.

Besides the headlining show, Springfest will have all the features of previous years, including carnival rides and games, food vendors, and the popular corn hole tournament.

“Rides, games, musicians, and vendors will provide entertainment and food for children and adults. This year the music concert headliner will be a rising star from Batesville, our own Jameson Rodgers. Springfest 2022 will be a wonderful opportunity for everyone to participate in wholesome fun, to visit the historical square, to support local organizations, and to appreciate our freedom in the United States of America,” Ferrell said.

With the success of his Platinum-certified, No. 1 debut hit “Some Girls” and his follow-up Top 10 smash “Cold Beer Calling My Name,” Rodgers is cementing his place amongst the future legends of the genre, finding that truth and toughness mixed in with a whole bunch of authenticity can form a career for even the most skeptical of artists.

“I’m a simple dude that likes simple things, and that’s about it. I like writing songs and playing shows and making people feel something through my music. That’s about it. That’s who I am,” he said in a press release.

Rodgers, a South Panola graduate, grew up not only on 90’s country music, but on the work ethic demonstrated during those days by the people who surrounded him and the artist who inspired him – artists such as Bruce Springsteen, Merle Haggard, and Eric Church.

“Sinners Like Me stayed in my truck for probably two straight years,” Rodgers said. “I was just getting started in music and just starting to take it seriously. I remember being struck by how his music was speaking to the guys even more than the girls. It just resonated with me.”

Rodgers played baseball at South Panola and then at Northwest Community College before finishing his education at the University of Southern Mississippi. He was already writing songs and had developed a local following.

Soon, Rodgers’ talent as a songwriter began to get noticed, as he co-penned multi-Platinum-selling hits for Florida Georgia Line (Top 10 single “Talk You Out of It”) and Chris Lane (No. 1 standout “I Don’t Know About You”), along with “Camouflage Hat” on Jason Aldean’s most recent album 9 and the title track of Luke Bryan’s latest release Born Here Live Here Die Here.

But soon, it was his turn to shine under the spotlight.

Rodgers finds himself finally being about to relish in the reaction of the crowd to his monster hit “Some Girls,” a career-defining song that unbelievably gained much of its traction during the uneasy years of the ongoing pandemic. The song went on to earn more than 207 million on-demand streams and was ranked No. 17 on Billboard’s 2020 year-end Country Airplay Songs chart.

As a co-writer on every song but one on the Bet You’re From a Small Town album, Rodgers proves that he isn’t looking for quick hits without substance. He sings anthems without gimmicks and stays in his lane, and once he’s put a hard day of work in, he retreats to the people who made him who he is at his core.

“All these songs make me feel something. That’s the whole goal of music, isn’t it? I just feel like I’m writing the best songs I’ve written and I’m singing the best stuff I’ve ever said,” he said.