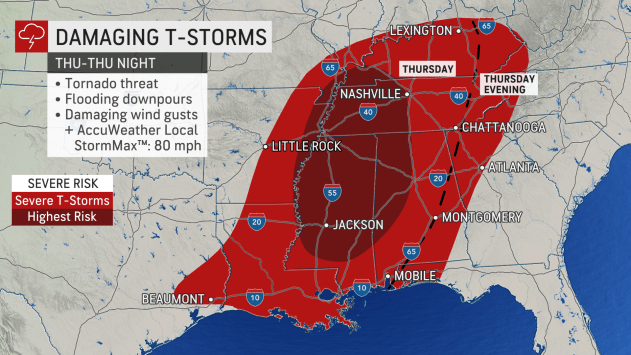 A springlike setup is in place across parts of the nation’s midsection with unseasonably warm and moist air clashing with incoming colder air, AccuWeather forecasters say. This battle between warm and frigid air will produce a volatile round of severe weather that could result in a significant tornado threat from late Wednesday through Thursday.

This severe weather is unfolding on the warmer edge of a robust storm system that is expected to impact much of the eastern half of the United States through the end of the week with flooding rain, heavy snow and powerful winds.

While much of the central and eastern portions of both Oklahoma and Texas will be at risk on Wednesday night, the threat of severe thunderstorms will cover a much larger area Thursday as storms track to the east.

“Winds high in the atmosphere are expected to be transported to the surface, and there will be a risk of tornadoes from the Texas-Louisiana border to Alabama,” said AccuWeather Meteorologist Jessica Storm.

As warm and moist air surges northward, the risk for severe thunderstorms will not stay confined to locations near the Gulf Coast. Cities as far north as Louisville and Lexington, Kentucky, could be in line for potent storms.