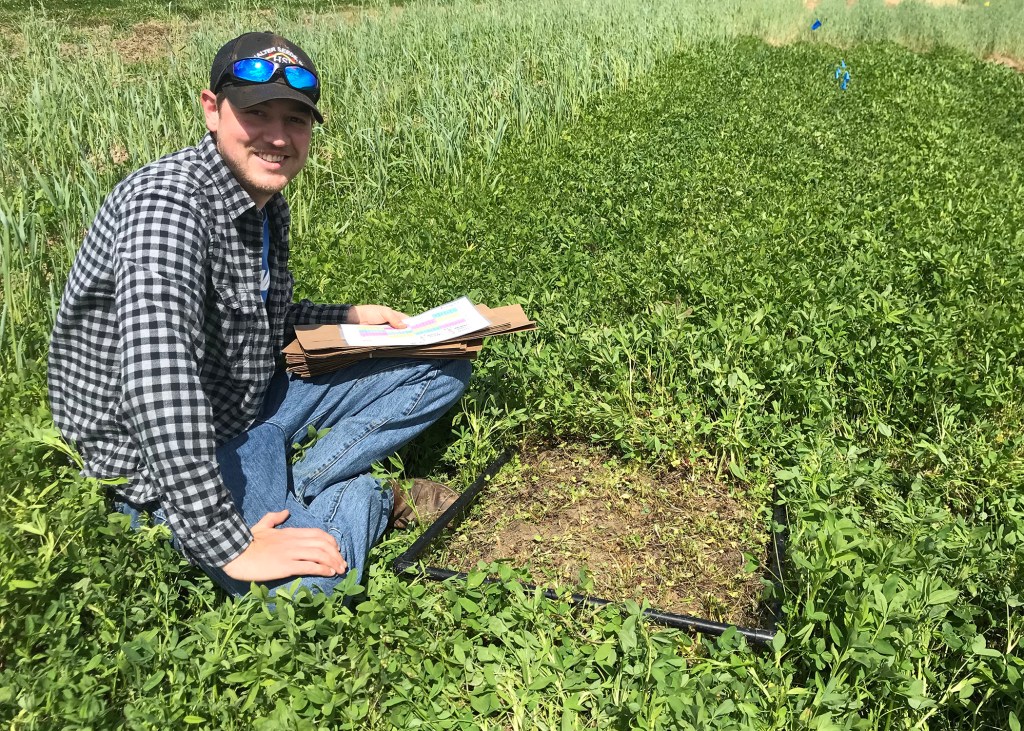 COVER -- Nolan Mullican, a Mississippi State University graduate student in agronomy, is part of a research project examining how to use cover crops in a corn production system. (Photo by MSU Extension Service/Erick Larson) Alt text -- A man kneels in a green field. ###

Researchers at Mississippi State University looking at how to successfully use cover crops in corn production systems must develop strategies to overcome challenges unique to this row crop.

Cover crops are plants grown outside of the normal cropping season mainly for conservation purposes. They often are terminated before the cash crop is planted.

Erick Larson, grain crops agronomist with the Mississippi State University Extension Service, said few growers have adopted the use of cover crops in corn because they produce nominal monetary return and often reduce profitability of the primary crop.

Most of Mississippi’s primary crops — corn, cotton and soybeans — are planted in the spring, grown through the summer and harvested in the fall.

“Cover crops normally grow well past typical planting times for field crops, so the usual practice is to kill cover crops prior to or at planting time to minimize their interference with the field crop,” he said.

Corn is the first crop planted in Mississippi each year, often as early as March, in what is usually a very rainy time of year. The vegetation produced by a cover crop can mechanically hinder planting and restrict sunlight from warming and drying the soil. This also can limit seed germination and establishment of a good stand of corn, reducing productivity.

“We’re looking at different management options where we can realize the benefits of using cover crops while reducing the risk of yield losses and profitability,” Larson said.

“This research project is important because corn is vulnerable to potential complications from cover crops because it is the first crop planted in the spring, benefits from early planting and is very sensitive to plant growth variability,” Larson said.

Crops such as cotton or soybeans have a better ability to compensate for inconsistent establishment. They are also normally planted later than corn when soils tend to be warmer and drier.

“In our high rainfall climate, we already have restricted planting opportunities for corn because we receive surplus rain during the planting season,” Larson said. “We generally need a full week of sunny weather before it’s dry enough to allow tractors an opportunity to plant or prepare fields for planting.”

The challenge for corn is how to gain the soil benefits of cover crops without reducing income at harvest.

Nolan Mullican, an MSU graduate student from Stanley, Kentucky, who is studying agronomy, said corn is less forgiving than most of the other conventional row crops grown in this region.

“Corn is planted at lower populations and generally produces only one true ‘fruit’ or ear,” Mullican said. “This means corn stand loss can be very detrimental to the yields produced. The presence of cover crops can mechanically interfere with corn planting and impede corn seedling establishment and development.”

In 2020, Mullican began a master’s research program under the guidance of Larson, along with MSU Extension and Mississippi Agricultural and Forestry Experiment Station researchers Jason Krutz, Jason Bond, Justin McCoy and Rocky Lemus. The purpose is to investigate how to successfully integrate cover crops with corn production systems in the Midsouth.

“The overall goal of this research is to minimize interference from cover crops on corn establishment, growth and productivity,” Mullican said. “Our findings will identify limitations associated with cover crops and lead to development of practical systems which will sustain soil health benefits and improve returns.”

The first step is to evaluate the timing of herbicide applications to terminate the cover crop. Researchers want to determine how long they can allow the cover crop to continue growing and providing soil benefits and still terminate it before it interferes with corn planting or emergence.

Mullican said that, based on early results, the timing of cover crop termination has a dramatic effect on the vigor, health and outcome of subsequently planted corn.

The next phase of the study examines cover crop planting and tillage methods, which affect plant distribution and potential interference with corn. Corn in the Southeast is grown on raised beds to improve drainage in the high rainfall environment.

Legumes are broadleaf plants with the ability to capture nitrogen in the atmosphere and store it in the soil for plant use.

Mullican said early results show substantial differences in the suitability of different cover crop species to corn production systems. These differences include growth habit, ease of establishment and adaptability to a Southern climate.

The Mississippi Corn Promotion Board and a Natural Resources Conservation Service Conservation Innovation Grant are supporting this research. Results will be published through the MSU Extension Service.