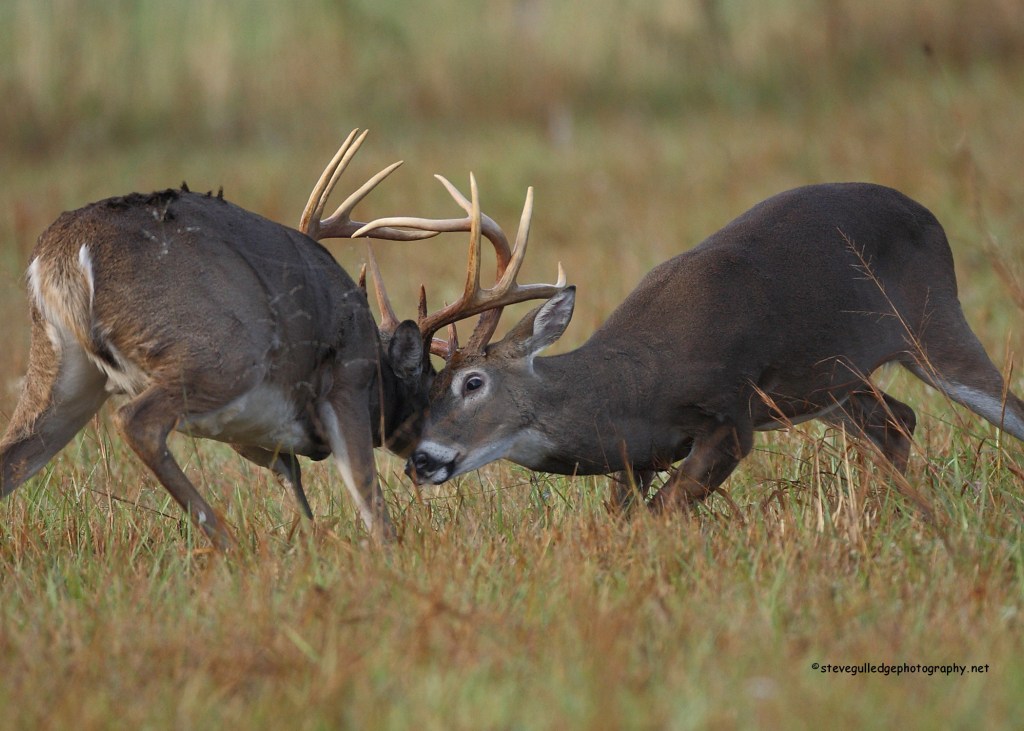 Cutline: The lifespan of bucks is generally less than does, and brain abscesses are one reason why. (Photo by Steve Gulledge) Alt text: Two male deer locking horns

Each year in Mississippi, thousands of hunters spend time in the woods hoping to see and harvest a buck. Last year, hunters in the Magnolia State harvested about 122,000 bucks, producing venison for the table and antlers to admire for a lifetime.

Even without having to worry about hunters, however, life for a buck is no cakewalk.

First, at the age of about a year, a buck’s mother kicks him out of the house and forces him to leave her range and go make life for himself. The yearling buck may establish his new home range a mile or two away but sometimes much farther.

Over the course of a buck’s life, he not only needs to figure out where to find valuable forage plants, where the oak trees are dropping acorns, and where the safe places are to be bed and ruminate, but he also has to determine where he falls in the buck social hierarchy.

Many hunters think that only the oldest, most dominant bucks will breed during the rut, but this is not true. Bucks in every age class, including yearling bucks, will breed given the chance. If an older, dominant buck is not in the neighborhood, then a younger, subordinate buck will have a breeding opportunity.

So, how do bucks sort out their social hierarchy? In short, they fight it out. Starting after they turn 1 and especially 2 years old, bucks engage in a behavior biologists call “sparring.” Sparring is not an outright fight, but rather an opportunity for two bucks to push each other around to sort out which one is stronger.

Most of the time, when two bucks have their antlers locked together, they are simply sparring. On some occasions, when two evenly sized bucks refuse to back down, they will fight. This is the behavior hunters try to mimic with rattling antlers. When two bucks fight, it draws a crowd. Other bucks will often run to the scene when they hear bucks fighting.

Typically, a fight will last from a few seconds to a couple minutes, and it stops when one of the bucks simply gives up and runs away. Of course, when fighting occurs, there can be some unintended consequences. Eyes can be gouged out, bucks can be gored in the neck and shoulders, and some bucks get their antlers locked and both die of exhaustion.

But there’s another deadly outcome that can take many months to manifest: the brain abscess. These abscesses occur when the antler pedicle is broken, or when the skin around the antlers is cut or torn, and a bacterium named Trueperella pyogenes invades. This bacterium is commonly on the skin of deer and poses no threat until it is allowed to enter the body through a cut in the skin. When it gets in the tissue of a buck, the bacterium can cause an area of infection — an abscess — to form beneath the skin of the forehead. If the infection invades the cranium and enters the brain, the buck will die.

Brain abscesses are not as well known as other deer diseases like hemorrhagic disease or chronic wasting disease, but they can be important, nonetheless. My colleagues with MDWFP report that many of the calls they get regarding a buck behaving strangely are ultimately determined to be cases of brain abscess.

The lifespan of bucks is generally less than does, and the brain abscess is one reason why. Learning about all the trials and tribulations bucks go through will help you appreciate seeing one even more. To report a sick deer, visit the MDWFP app, mdwfp.com, or call 601-432-2199.