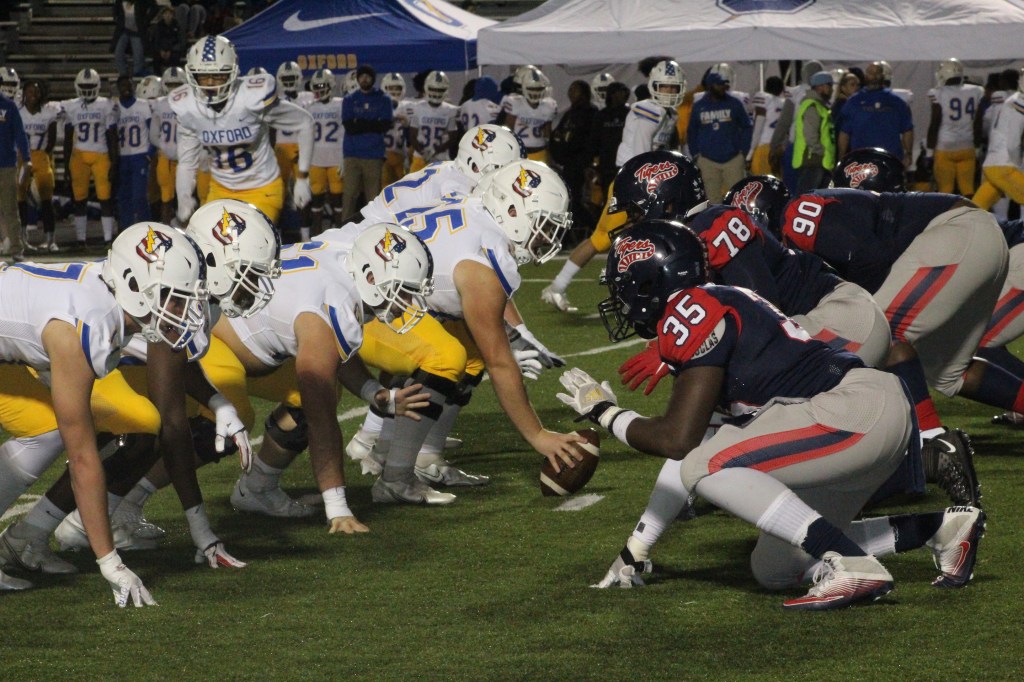 The South Panola Tigers 2021 football season came to an end Friday with a 35-28 loss to Oxford in the first round of the North 6A State playoffs. The Tigers ended the year officially with a 8-4 record with two of the losses forfeited due to COVID-19 issues at the beginning of the season.

South Panola and Oxford staged a classic back and forth playoff football game full of big play after big play, but in the end it was the Chargers who advanced to round two of the North 6A state playoffs after pulling off a thrilling 35-28 victory over the Tigers Friday night (Nov. 12)  at Robert H. Dunlap Stadium.

With the win Oxford (8-4) earns a rematch against Madison Central in the second round next Friday. Madison Central defeated the Chargers 48-7 in the last week in the regular season finale.

South Panola finished its season at 8-4.

With the score tied 28-28 and South Panola having all the momentum after a Julius Pope nine-yard touchdown run with 3:00 remaining in the game, Oxford quarterback Micheal Harvey hit Cashe Shows on a slant pattern on 3rd-and-14 with Shows racing 70 yards for the game-winner.

South Panola, who at one time trailed 28-7, had one last gasp only to have Elijah Wadley intercept a pass to seal the win.

Senior wide receiver John Blockmon caught six passes for 109 yards that included a 34-yard TD strike from Hubbard. Ethan Johnson added four receptions for 105 yards and a 69-yard pass  in the second quarter to account for the Tigers first score.

Julius Pope rushed the ball 16 times for 126 yards while adding three catches for nine yards and five tackles on defense while fighting through leg cramps throughout the game.

Oxford staggered the Tigers with three scores on its first three possessions to take a 21-0 lead before South Panola answered with the Hubbard -to-Johnson connection at the 9:32 mark of the second quarter.

The Chargers tacked on another touchdown with 1:32 remaining to take a 28-7 lead into halftime.

Trailing 28-13 after three quarters, South Panola made its charge as Hubbard punched in a two-yard scoring run to cap off a nine-play, 75-yard drive to cut the deficit to 28-21 at the 8:59 mark. After forcing Oxford to punt on the following series, the Tigers tied the game on Pope’s run  and Connor West’s PAT.

“We hurt ourselves when we got behind early in the first quarter, but we never blinked and found a way to get back into the game and gave us a chance to win, but unfortunately they made one or two bigger plays than we did at the end,” said South Panola head coach Ricky Woods.

On the defensive side of the ball, MoTrell Chapman led the way with 11 tackles while senior Jalen Kirby had eight stops. Anione Wright garnered five stops.

On the season, unofficial stats from MaxPreps says South Panola averaged 31 points per game while surrendering 13 points per clip. On offense, the Tigers were 114-of-171 with seven interceptions and 18 touchdowns passing for 1,649 yards.

Junior quarterback David Hubbard threw for 1,560 yards on 109 completions and 18 touchdowns while gaining 1,621 in total yardage.

Sophomore Julius Pope finished second on the team in rushing with 398 yards on 60 carries and five touchdowns. Senior running back Damarrion “Duke” Shaw added 31 carries for 199 yards and four touchdowns.

Senior wide receiver Seandun Clark led the Tigers with 22 catches for 460 yards and four touchdowns while sophomore John Blockmon had 19 receptions for 252 yards and three scores.

On the defensive side of the ball South Panola recorded 12 quarterback sacks and picked off seven passes.

Pope led the way from his linebacker position with 59 total tackles,11-for-loss and four sacks to go along with eight passes-broken-up.

Junior Mo’Trell Chapman followed with 55 stops including a season-high 11 against Oxford.