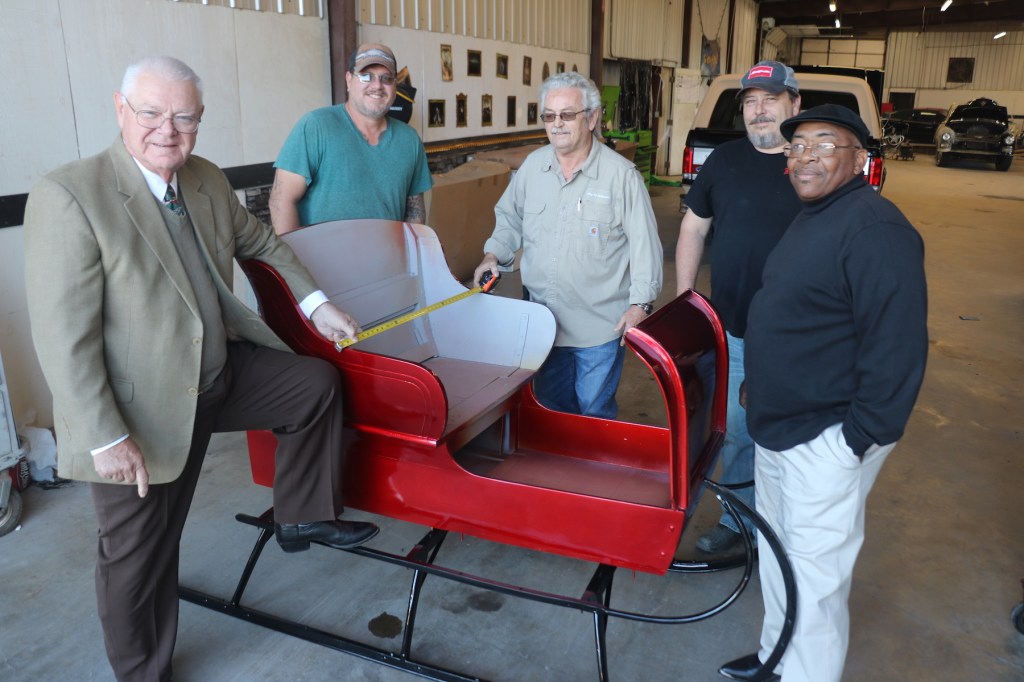 Batesville officials held preliminary meetings last week with representatives from The North Pole, and got an early look at the construction of a special sleigh for Santa Claus, all in preparation for the annual Batesville Christmas Parade that will roll at 6 p.m. on the first Tuesday of December, per city tradition.

Mayor Hal Ferrell said final plans will be completed in the days before the parade, but the main tenets of a deal between Kris Kringle and the city have been agreed upon.

“As every good person knows, there is a real Santa Claus, but there is only one. Many very good Santa Claus actors bring joy to children in malls and stores, but it’s difficult to book the actual Santa Claus for an event,” Ferrell said. “We worked very hard to get Santa Claus for our parade, and it’s what the citizens of our great city deserve.”

“I want to thank the city employees who have worked so hard getting the lights and decorations hung around town, and for all they will do to make the parade the best it can be,” Ferrell said. “We hope to see all our wonderful people lining the streets of Batesville for this year’s parade.”

Batesville has always secured the real Santa Claus for its parades, but some feared that last year’s cancellation due to pandemic conditions would cost the city its longtime booking for the first Tuesday in December.

Parade director Mark Shields, the city’s purchasing agent, has overseen the parade with Enid Lake Baptist Church the past several years. Shields said he was concerned about the booking until he thought of a plan that would help persuade the legendary jolly gentleman to resume his yearly trips to Batesville.

“There are lots of parades around the country and the world, and many of them are bigger than what Batesville is able to present each year, but then I remembered that we have some things that no other city in the world can offer,” Shields said.

“I hustled to the Post Office with a box of chicken from Jiffy and a cake from the Caramel Factory. I sent them overnight with a half-gallon of Brown’s Dairy milk I got at Piggly Wiggly, and three days later the mayor was calling to say they had worked things out,” he said.

Another order for importation business looked at last week was the progress of the sleigh for Santa Claus to use in the parade. Santa always arrives in his personal sleigh, but in years past he has dropped it off at Batesville Tire & Muffler shop for new shocks and treads while he rode in the parade.

Santa’s people have said the service and quality of the work turned out by Mike Swindle, and the stories Ricky tells them while Mike works, have made Batesville’s muffler shop the go-to place when The North Pole is readying the official sleigh for the hectic night of Dec. 24.

The sleigh for this year’s parade is under construction at CB’s Body Shop on Hwy. 6, east of Batesville in the old Holcomb Body Shop location. There, owners Jeff Harwell and Robbie Ashford are about half finished with the special sleigh.

Ferrell, Shields, and Alderman Bobby Walton got the first look at the sleigh last week, and heard the plans for the final product. The city representatives measured the frame and seating area, and later verified the sleigh meets the specifications required by The North Pole.

“This sleigh will be really nice, probably the best one we’ve ever had for Santa Claus,” Walton said. “I think I speak for the whole board of aldermen when I say we really appreciate all the work that goes into our parade, and we hope to see large crowds along the whole parade route.”

The theme for this year’s parade is “Christ, The Hope of Christmas” and all floats and cars should reflect the Spirit of Christmas. Shields said “Happy Holiday” signs will not be allowed, and there should also be no pretend Santa’s on any floats or signs.

“There is only one Santa Claus, and he always comes at the end of the parade,” Shields said.

Additionally, there will be no vulgar or obscene music played during the parade by any participant, and suggestive dancing is also banned.

Shields said that a story circulating around the county about the parade not allowing candy to be handed out is untrue, and that children can expect sweet treats as always. He did say that participants are urged to follow CDC guidelines and wear masks for the public event.

All entries must be approved and applications must be completely filled out. Shields said he must be informed about each entry, including its length and content. Parade lineup will begin at 3 p.m. on Park Street and no entries will be allowed without prior approval.

Photo: Mayor Hal Ferrell, Jeff Harwell, Mark Shields, Robbie Ashford, and Alderman Bobby Walton look over the framework of what will be the official sleigh for Santa Clause in the annual Batesville Christmas Parade slated for the evening of Tuesday, Dec. 7.