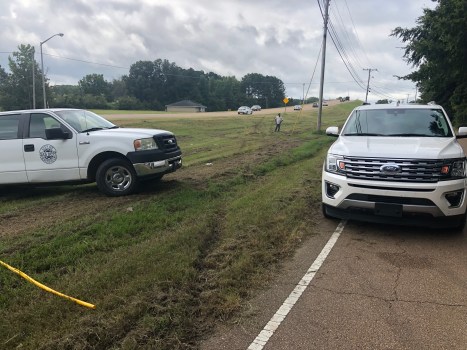 The truck came over the Hwy. 51 bridge in north Batesville at a high rate of speed, witnesses said. 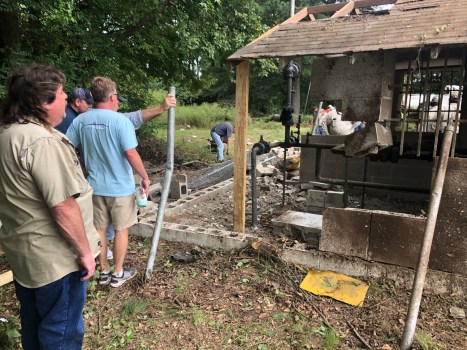 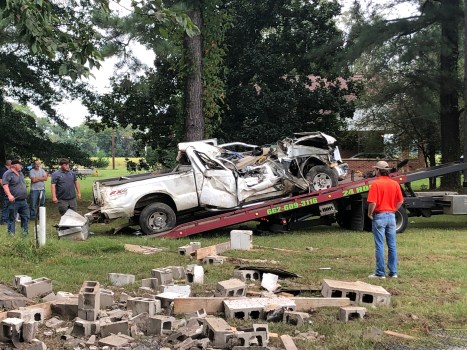 The truck's impact knocked blocks and fencing across the lot

The City of Batesville narrowly escaped serious infrastructure damage, and the driver of pickup truck with a Tallahatchie County tag is fighting for his life, following a one-vehicle accident in north Batesville about 9 a.m.

Paramedics worked on the scene to stabilize the driver before transporting him by ambulance to a hospital for further treatment. The driver was ejected from his truck after slamming into the corner of a small building, about 8×16, that houses the Gas Department’s Boothe Street Regulator Station.

The little building was a simple block structure with a wood roof, and was secured with hurricane fencing around the perimeter. High pressure natural gas passes through the regulator and becomes manageable for distribution to homes and businesses throughout parts of the city.

Public Works Director David Karr said a City of Batesville employee had been at the site earlier in the morning for a routine check of the system.

“Our prayers and thoughts are with the driver of the vehicle first, and second we are grateful the Gas Department employee had already performed his task and left when this happened,” Karr said. “The truck obviously missed the regulator by inches when it hit the corner of the building, and we are very fortunate that happened.”

Karr said if the regulator had been hit with the force the building took, the Gas Department would have been dealing with high pressure gas gushing into the air, and possibly an explosion. The damage would have been a major repair job and disrupted gas service to parts of the city.

As it happened, the City will only need to rebuild the structure. Aldermen Teddy Morrow, Dennis Land, and Stan Harrison were on the scene, agreeing that City officials will likely want to rebuild with a metal building and provide more reinforcement for the regulator.

About 25 city employees were on the scene helping to clean the debris and temporarily wrap pieces of the fence around the what remains of the rear of the building for safety.

Witnesses to the accident said the truck was traveling north on Hwy. 51 leaving Batesville. They said the truck crossed the overhead bridge at a high rate of speed (estimated at 100 mph or more) and lost control. Tire marks show where the truck left Hwy. 51 to the left, crossed Boothe Street, and began to flip through the bushes and trees until it hit the building and landed about 100 feet further.

The driver was found in front of the truck with severe injuries, including head trauma.

The site of the accident is a common cutoff road for drivers coming into Batesville on Hwy. 51 to reach the residential neighborhoods there and for access to the J.P. Hudson ball park.