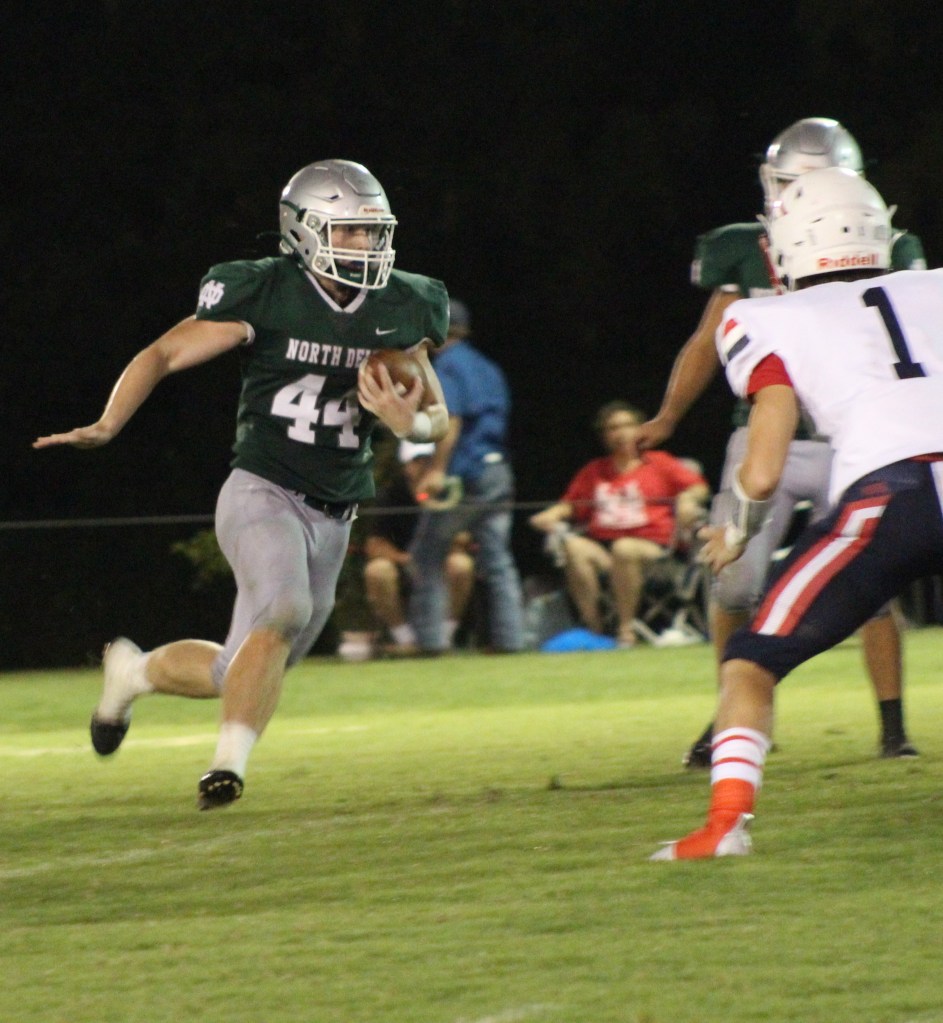 North Delta football will look to get back on track Friday when the Green Wave travels to Cleveland to take on Bayou Academy in a 7 p.m kickoff.

The Colts of Class 5A enter the contest undefeated at 3-0 on the young season. Bayou opened the season with a 33-7 win over Riverfield, La., before picking up a forfeit win over Marshall Academy two weeks ago. They blanked Greenville-Washington School 54-0 last week.

North Delta (1-2) hopes to snap a two-game losing streak and hopefully retain the services of junior quarterback/ free safety Lewis Smith, back after missing the last two games with a hip flexor injury.

Semmes Dorrel or Layton Wells will call signals if Smith can not go in the game.

The Green Wave leads the all-time series 10-5 with Bayou winning the last two meetings including a 25-20 victory in 2018.

For North Delta last week against Kirk Academy, the ol’ pigskin just didn’t  bounce their way and it couldn’t have happened at a worse time in the district opener for both schools.

With the score deadlocked at 0-0 with 5:44 remaining in the fourth quarter and facing a third-and 22, Kirk quarterback Colton Hathcock hit Montgomery Ferguson on a 41-yard touchdown strike to give the Raiders a 7-0 victory.

The Kirk win broke a 12-game losing streak for the Raiders to the Green Wave.

Kirk (2-1) caught a huge break two plays before the winning score when facing a fourth-and-2. Jack Boone caught a deflected pass that resulted in a first down to keep the drive alive.

The loss spoiled an outstanding effort by the North Delta defense that turned away the Raiders a majority of the night despite Kirk starting their possession 10 of 12 times in Green Wave territory.

Levi Gee paced the Wave rushing attack with 66 yards on 19 carries while Aden Sykes and Wolfe added 15 and 13 yards each.

Layton Wells and Stiles Rowland had one reception each. North Delta also hurt themselves with three turnovers and punts of 22,15,11 and 6 yards In the first half.

“Our defense played an outstanding game, but just never got anything going offensively and plus the turnovers didn’t help,” said North Delta head coach Mac Aldison. “We had chances at times but never could move the ball on a consistent basis. Kirk had a lot to do with that, they have a really good ball team.”

North Delta got off to an inauspicious start on their opening series as a botched punt gave Kirk first-and-goal on the five, but had to settle for a 24-yard field goal attempt that was pushed wide left.

The Green Wave offense meanwhile never crossed midfield with its deepest penetration being at their own 46-yard line in the third quarter.