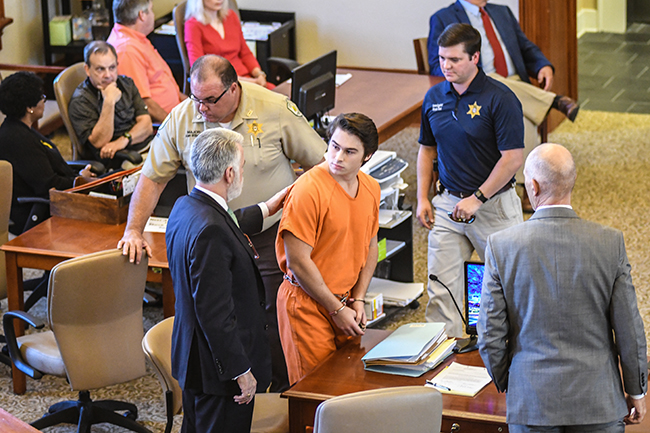 Brandon A. Theesfeld, center, looks over at his attorney Tony Farese before the start of a hearing where he was indicted for capital murder in the death of Alexandria 'Ally' Kostial of St. Louis, Mo., at the Lafayette County Courthouse in Oxford, Miss. on Monday, September 30, 2019. Theesfeld pled not guilty. (Bruce Newman, Oxford Eagle)

A former Ole Miss student who is facing a capital murder charge for allegedly killing classmate Alexandria “Ally” Kostial is set to accept a change in plea to guilty of murder in the first degree.

Attorney Tony Farese, who represents Brandon Theesfeld,  said a hearing is scheduled at the Lafayette County Courthouse at 10 a.m. on Friday.

“We negotiated a plea,” Farese said. “Mr. (Swayze) Alford and I worked really hard on this case and we were able to reach this agreement with the State of Mississippi. The District Attorney’s office has worked diligently in representing the (Kostial family) in this matter, as well.”

On the morning of July 20, 2019, Kostial’s body was found by deputies with the Lafayette County Sheriff’s Department while on routine patrol in Harmontown near the Buford Ridge area. Two days later, Theesfeld was arrested by officers with the LCSD and Memphis Police Department at a gas station in South Memphis.

On July 23, 2019, Theesfeld made his first court appearance and  was formally charged with killing Kostial. In August of that year, a Lafayette County Grand Jury indicted Theesfeld with Capital Murder.

The case has been at a standstill since with requests for a psychiatric evaluation made by Farese in 2019. Due to the COVID-19 pandemic, trial dates were delayed in Theesfeld’s case.

Theesfeld has the ability to petition for a conditional release after he turns 65 and has served 15 years of his sentence.