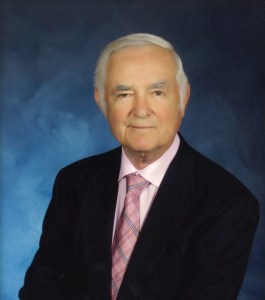 Gene Lee Davidson, 86, a retired ophthalmologist, passed away peacefully at home into the welcoming arms of his Savior on Aug. 18, 2021, in Tallahassee.  He was surrounded by his loving family.

Gene was born in Pope, Mississippi (current population 409) on April 26, 1935, to L. Stacy Davidson Sr. and Thelma L. Davidson.  Gene attended Pope High School and, upon graduating high school, attended the University of Mississippi where he earned his B.S. degree in chemistry and biology (1957) and Doctor of Medicine (1961).

He told the story that he chose medicine over taxidermy because he couldn’t turn a bird inside out.  He completed his residency in ophthalmology at the Ochsner Medical Center in New Orleans, and afterwards served for three years as a flight surgeon at Homestead Air Force Base, Florida. He was discharged as a captain in the Medical Corps in 1965.

In 1968, Gene, his wife Larette and their boys moved to Tallahassee where he began practicing medicine; he was the first in Tallahassee to own the equipment and perform laser surgery on his patient’s eyes. Gene was the owner of Tallahassee Eye Clinic, serving his patients for over 30 years.  Gene also distinguished himself by being elected president of the Florida Society of Ophthalmology in 1978 and was very active in legislative affairs.

When Gene’s sons attended Leon High School, he saw a need to support its academics and formed the first public high school 501(c)(3) foundation in the country. The school honored him by his induction into the Leon High School Hall of Fame. He and Larette built a full-size fiberglass Lion to pull onto the field at Leon High School football games.

Because a fake lion was not enough, one day out of the blue, Larette found and brought home a real lion cub and Gene agreed to keep the cub for a time, feeding and insuring against its biting someone.

Even though Gene attended Ole Miss, he quickly became an FSU fan attending football and baseball games rain or shine and men’s basketball, his favorite sport.  He was president and an active member of the Tallahassee Quarterback Club. As a part of the Tallahassee Quarterback Club Foundation, Gene, with others, created a national football award known as the “Biletnikoff Award” which is presented annually to the season’s outstanding college football receiver.

Gene was a member of the FSU Booster Board and strong supporter of the FSU Baseball Bullpen Club. An avid outdoorsman, fitness buff and tennis enthusiast, if Gene wasn’t at the gym, he was playing tennis with his men’s group (he had a great backhand shot), watching the FSU tennis team compete, or at his farm on his tractor mowing and preparing fields to plant chufas, oats and rye and other food for the wild game.

Gene married Diane Morris Dunson in 1999.  They had a wonderful life together, especially enjoying the mountains of North Carolina, playing tennis, going to sporting events, traveling, attending church, and dining out in as many restaurants as possible! They held many campfire gatherings for family and friends at Riverview Farms, Gene’s ancestral retreat that was founded by his great, great, great grandfather, Dr. Malcolm Nicholson, known as the Father of Medicine in Florida.

Most importantly, Gene loved spending time with his children, grandchildren, and more recently, great grandchildren.  Gene could be spotted teaching his grandchildren how to plant chufa seeds and how to do the proper yoga tree pose — he was full of life and could put many twenty-year olds to shame with his stamina!

Gene’s Christian faith was also a vital part of his life.  Gene was an active member of the Gideon’s for many years and loyal in his church attendance.  He helped fund the building of the rustic, open-air St. Teresa Beach Church that welcomes everyone to worship the beauty of God nestled among the sand dunes and the administrative building at Bradfordville First Baptist Church.  To sum it up—Gene was a man of integrity, a noble gentleman, an eminent physician, a devoted family man, a friend to many, and a joyous Christian.

In lieu of flowers, contributions may be made to Bradfordville First Baptist Church, a religious organization of your choice, or Big Bend Hospice (1723 Mahan Center Blvd., Tallahassee, FL 32308).  Culley’s MeadowWood Funeral Home (700 Timberlane Rd.) is assisting the family with arrangements.

The family is forever grateful for the love and support of Dr. Michael Forsthoefel, Jennifer Taylor RN with her AGL Care Management team of Crystal Clay RN, Mary Beth Ervin RN, Erica Goff and a special thanks to his compassionate caretakers, Terry Walton and Rebecca Lang, along with the remarkable aid of Big Bend Hospice and Toni Singletary RN and Megan Haywood RN.