A rather bizarre Presidential campaign stop 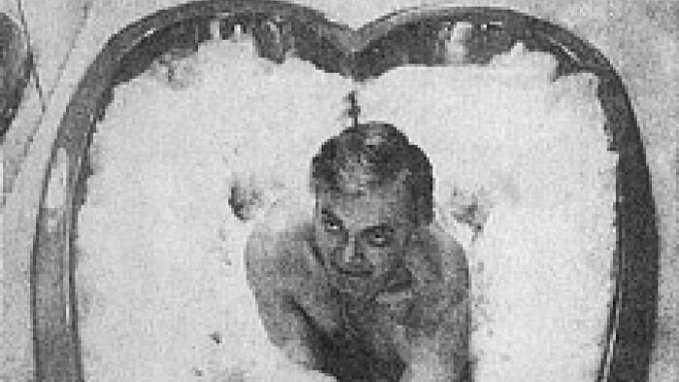 The following appeared in the Arizona Daily Star this week, recalling a time when Batesville’s Cliff Finch had one of the most interesting events any Presidential candidate has ever held for reporters. More than 40 years later, the story still gets passed along, from time to time, as does the accompanying photo that ran in newspapers across the nation. Former Governor Finch’s campaign fizzled, and he returned to his law practice in Batesville soon after this event.
Elaine Raines Arizona Daily Star

The former Governor of Mississippi, Cliff Finch, was a very late entry into the 1980 Democratic presidential primary. Shortly after he announced, he brought his campaign to Tucson. “I represent America. Tucson is part of America,” he said.

It started out like a routine pre-election visit. In January 1980, Finch met with about 400 guests at a private party. It was a traditional gathering, although several attendees did ask who he was. Apparently, in New Hampshire he had been asked by reporters for identification.

Finch discussed his platform. On energy: “We should turn the oil tankers around and send them back to the Middle East. That would get the public’s attention.”

On inflation: “We could cut 90 percent of the bureaucrats and many of the 10 million (federal) rules and regulations.”
Possibly a bit simplistic, but nothing out of the ordinary there. And then there was this.
For some reason lost to history, Cliff Finch took a bubble bath. Not just any bubble bath, but a good soak in a heart shaped tub with the media invited along for the photo op.

“He’s so good with the media,” a friend said, covering his name tag with his palm to conceal his name from a reporter.