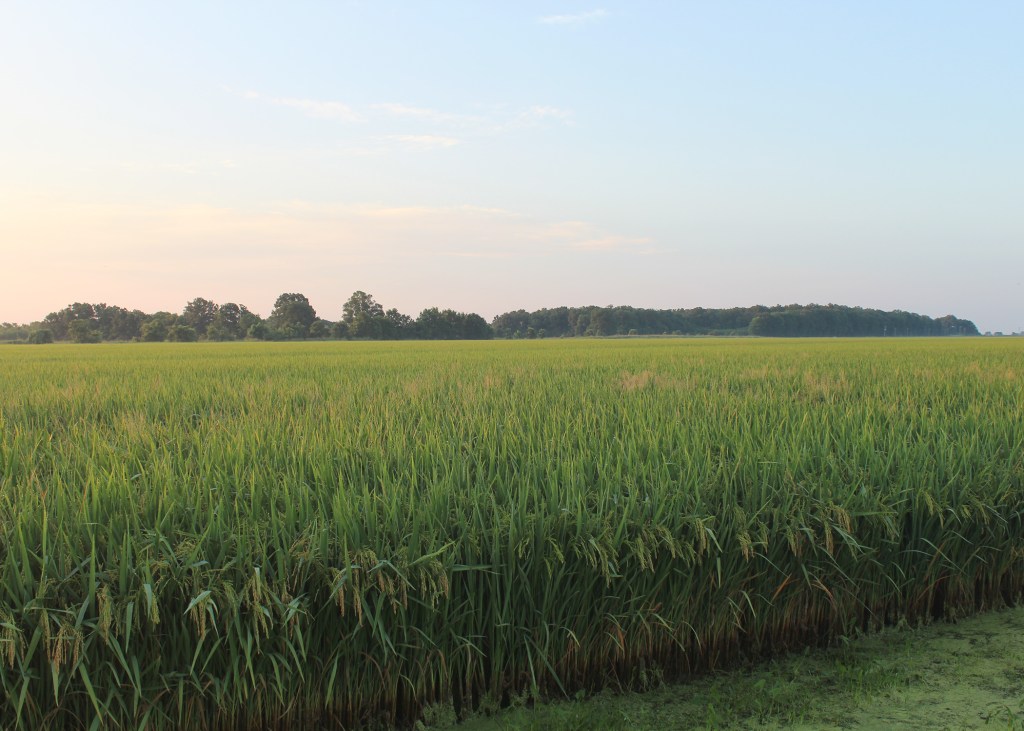 CUTLINE: Rice in this field between Arcola and Hollandale, Mississippi, approaches harvest on Aug. 11, 2021. Despite issues with fall armyworms and flooding, the state’s rice crop is in good condition. (Photo by Mississippi State University Extension/Kenner Patton) ### Alt-text: A rice field.

In late June and early July, farmers across the state growing multiple row crops, including rice, could not reach acceptable levels of control for fall armyworms with pyrethroids. This problem led Extension crop specialists to ask the Mississippi Bureau of Plant Industry to request a Section 18 crisis exemption from the Environmental Protection Agency for the insecticide Intrepid 2F. On July 28, it was granted.

“Fall armyworms have been much worse this year than we have ever seen in rice, pastures, lawns and other crops, at least in my career,” said Jeff Gore, Mississippi State University Extension entomologist and researcher, who is stationed at the Delta Research and Extension Center in Stoneville. “From a rice standpoint, we typically spray a small percentage — less than 10% — of the acres every year in Mississippi. This year we have probably already sprayed much more than 50% of rice acreage.”
“Typically, we could get outstanding control of fall armyworms with a low to mid-rate of a pyrethroid insecticide. That is not happening this year. In most cases, even the highest labeled rate of a pyrethroid is not providing acceptable control,” Gore said.

While some row crops have multiple alternative insecticide choices to treat fall armyworms, rice has only one: diflubezuron. With an 80-day preharvest interval, growers could not use diflubezuron, as rice harvest begins in August.

The Specific Exemption is still under review, but growers can use Intrepid 2F until the EPA makes a final decision. If approved, growers can continue its use throughout the growing season. If a similar situation with fall armyworms occurs next year, the Bureau of Plant Industry will again need to apply for a Section 18 exemption.

“We are in relatively good shape outside the area impacted by flooding, despite the problems we had with armyworms” said Jason Bond, weed scientist with the MSU Extension Service and researcher with the Delta Research and Extension Center in Stoneville. “Our Extension specialists were able to get a pesticide exemption to help get them under control.”

“The flooding caused some of the decrease in rice acres,” Mills said. “Rice acres that were destroyed would likely not have been replanted to rice because it was so late in the year.”

However, acreage was predicted to be down from 2020’s 150,000 acres going into the planting season in March. High corn and soybean prices led farmers to plant these crops instead of rice, Mills said.

The U.S. Department of Agriculture National Agricultural Statistics Service estimated Mississippi rice growers would plant 110,000 acres, but Bond said he estimates acreage to be below 100,000 acres.

“That’s just a windshield estimate from driving around the area looking at it. I don’t think we have even 100,000 acres this year,” he said, attributing the decreased acreage to flooding and citing the decision many farmers made to plant higher-priced crops.

Other than armyworms, rice growers have not had many issues with insects. Disease has not been a major issue either, Bond said.

Crops are not quite ready for harvest, which takes place in August and September in Mississippi, Bond said.

Will Maples, Extension agricultural economist, said farmers will see moderately better rice prices in 2021. For the week ending Aug. 6, the November rough rice futures contract was trading at $13.66 compared to $11.58 this time last year. USDA has projected the 2021 average farm long-grain rice price at $12.80 per hundredweight compared to $12.40 per hundredweight in 2020.

“Reduced supplies in 2021 due to an acreage reduction from last year are contributing to higher prices,” Maples said. “Long-grain plantings were down 11% below last year primarily due to high corn and soybean prices we saw this spring.”

Exports are forecast to be lower for the 2021-2022 marketing year because of reduced supply and less competitive U.S. prices, which may result in lowered prices, Maples said.

Baptist Hospital requiring all employees to be vaccinated