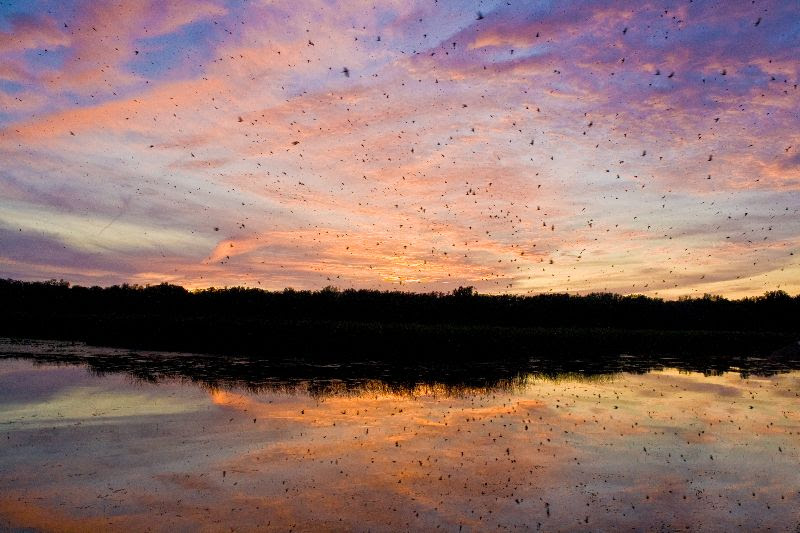 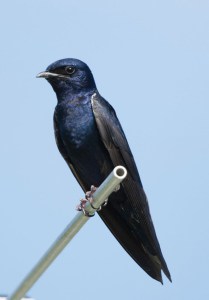 North America’s largest species of swallow, Purple Martins nest and raise their families in North America and winter in the rainforests of Brazil. East of the Rocky Mountains, Purple Martins nest almost exclusively in human-supplied housing. They are one of America’s most well-loved songbirds, known for their chattering song, aerial acrobatics, insect-eating habits and their tolerance of humans.

In late Summer, after leaving their nesting colonies, Purple Martins gather in huge flocks to feed, socialize, and rest before migrating. This activity, known as pre-migratory roosting, can attract hundreds of thousands of birds to sleep in one small area, arriving at sunset en masse in what Joe Siegrist, President of the Purple Martin Conservation Association (PMCA) calls “an amazing natural spectacle”. “As the sun begins to set, all of a sudden tens…even hundreds of thousands of Purple Martins appear out of nowhere in locations across the country. Their swirling acrobatics and sheer numbers are a phenomenon that everyone needs to witness”, Siegrist adds.

Purple Martins leave their roost near dawn in a mass exodus. The number of birds leaving the roost at the same time is large enough to be detected on weather radar. It looks like an expanding ring on the radar map. By studying radar data the PMCA is able to locate possible roosts located around North America.

Roost are typically associated with larger bodies of water where reed beds and dry islands with low, thick vegetation provide sanctuary from predators and a micro-climate warmer and less windy than land. They are also found in urban and suburban settings, sometimes formed in trees or on man-made structures such as bridges and pipes.

Depending on location, roosting can begin in mid-June and run through mid-September, peaking at the end of July to early August. Martins can come from hundreds of miles away to roost. Individual birds may use a roost for several weeks before migrating but the roost itself may last for 8-12 weeks or more.