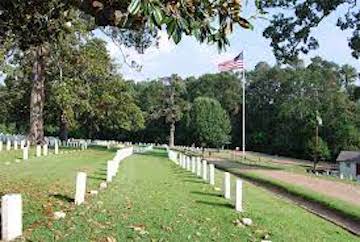 The Mississippi lawmakers worked with the Veterans Affairs Administration, U.S. Army Corps of Engineers (USACE), and city officials to secure the contract, which was expedited after federal officials in mid-July designated a serious erosion at the cemetery as an emergency.

“I appreciate the U.S. Army Corps of Engineers and Department of Veteran Affairs for their work to meet the urgent need for repairs to the Natchez National Cemetery,” Wicker said.  “This emergency contract award will help to guarantee the long-term stability of the bluffs and ensure that no damage comes to any gravesites.”

“The Natchez National Cemetery is hallowed ground, which makes this stabilization project all the more important,” Hyde-Smith said.  “I commend the VA, Army Corps, and the leadership in Natchez for working expeditiously to address erosion issues that threaten the cemetery.”

The stabilization project will entail stabilization of the west and south reaches of the national cemetery.  In all, the USACE awarded $9,118,587.50 for the work.  The funding was obligated from FY2021 Department of Veterans Affairs, National Cemetery Administration appropriations.  Work is expected to be completed by August 2022.

Recent severe storms have exacerbated ongoing erosion problems at the Natchez National Cemetery, claiming about 10 feet of bluff over the Mississippi River.  Over the past several months, mitigation measures have been in place to reduce further erosion at the bluff’s edge.  These measures include tarps and sandbags placed along the bluff to help direct rainfall toward the city storm water drains.  No graves have been affected by erosion.