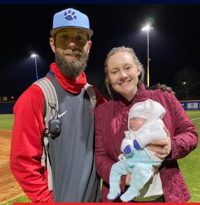 Cutline: Hunter Mize with wife Corey and daughter Oakley
The South Panola School District Board of Trustees recently approved the hiring of Hunter Mize as the new South Panola High School head baseball coach. Mize will begin his new role on July 1.Mize replaces Jake Mills, who recently accepted the head coaching job at Petal High School.A native of Oxford, Mize graduated from Lafayette High School where he played football, soccer, and baseball. He was a member of the 2016 4A StateChampionship Commodore baseball team. After Lafayette, he continued his baseball career at Northeast Mississippi Community College before playing at Blue Mountain College where he earned a bachelor’s in Elementary Education with a math and science concentration.While at Blue Mountain, Mize received the Gold Glove Award as an outfielder of the Tran-South Athletic Conference in 2012.Mize has eight years teaching experience – six years at South Panola and two years at Clinton High School. He served as an assistant baseball coach atboth schools and as Head Boys Soccer Coach at South Panola for six years.During his time as an assistant baseball coach, the South Panola team reached the First Round of playoffs in 2016 and 2017 and the Second Round in 2021. At Clinton, the Arrows won the 2018 and 2019 Region 4-6A Division Championship.He and his wife, Corey, have been married for three years. The couple has one daughter, Oakley, who is 4 months old.
You Might Like

Jim Tom Copeland, a 2001 graduate of North Delta School and a four-sport athlete, has been named the new head... read more