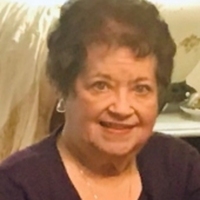 She was born in Memphis, Aug. 8, 1939, to her parents, Haward and Olive Hazel, who preceded her in death. Pat is survived by the love of her life, James L. Travis (Jim) with whom she began marriage 63 years ago, their daughter, Rene’ Travis Tyre and husband William Tyre and their son, Christopher Travis, and wife Anne Bower Travis. Also there are two grandsons, Adam Travis and Zachary Travis, and two step grandsons, James Tyre and Michael Tyre and five step great grandchildren.

A graveside service will be held at 11 a.m. on Thursday, May 27,  at  Batesville Magnolia Cemetery.

With Pat and Jim getting married a few weeks after she graduated from high school, she began a process of further education which tracked along with Jim’s academic preparation for ministry.

They spent their first year of marriage at Mississippi College as Jim completed his senior year and Pat completed her freshman year. Then it was off to Southern Baptist Seminary for Jim to complete his theological education. During those five years Pat gave birth to their two children, completed a course designed especially for spouses of the theological students (at that time the only spouses were wives), and began further college work in the extension program of Georgetown College.

When Jim completed his work and took a position as chaplain at a hospital in Milledgeville, Georgia, Pat, being very supportive of his ministry began setting up and nurturing their family life. For those 12 years she not only focused on family life, but was active in their church and became very involved in enhancing his work as director of the large chaplain department. This was where her entertaining skills became much clearer, hosting department dinners, building relationships with wives of the chaplains, developing a bond that has existed over fifty years.

When the call came offering Jim a chaplain position at the University Medical Center in Jackson,  it was accepted, with considerable reluctance from Pat and the children. A wonderful family world had been built in Georgia, due in great measure to the effort, skill and love that Pat had employed in that creation. It was truly home, their Place. But as they settled into life back in Mississippi Pat wasted no time in putting her gifts to work, this time, with both children in their teens or close to it, she moved to a different level in establishing her world of professional ministry, first as church secretary in a Presbyterian church whose pastor had served on Jim’s search committee.

Within a couple of years, after they had settled on a church for membership, Northminster Baptist Church, she was asked to serve as church secretary, which she did with such skill in both the logistics of the position and also in engaging the congregation with great care, love and creativity, that she was asked to take the vacant position of Minister of Christian Education and Family Life.

This is where Pat became not only a minister’s wife, supporting him and promoting a healthy, loving family environment, but also a skilled professional whose ministry is still frequently in conversation at Northminster. Then often Jim would follow her as she supervised youth trips for various retreats and conferences. He became known as “Mr. Pat.” He couldn’t have been more pleased and proud of her.

Then, that wonderful world was exchanged for a new Place…in Durham, North Carolina where Jim assumed a joint appointment in Duke University Hospital and Duke Divinity School. But this time there were no children to travel with them. For a while in Durham Pat was somewhat at a loss in terms of family life and all that had meant. It was not long, however, as she and Jim became members of Watts Street Baptist Church, that her winsome, welcoming way of living out her faith, her love for children, her development of friends were embraced by the church in employing her as church secretary.

In that role, again, she served in such a way that her legacy there will long endure. Then after six years in that position, when she decided to retire, she was approached by a board member of the Baptist House of Studies at Duke Divinity School for a “brief” stint of assisting the Director of the Baptist House in administrative areas. This turned into a five year span in which she became a surrogate mother to many of the Baptist students, again leaving a legacy of love that is ongoing.

The final 17 years of Pat’s life have been circumscribed by a series of major health crises, some of which were critical conditions, all of which she faced with her simple yet profound faith, courage, and care for others.

When finally limited physically, from her wheel chair she offered an “audience” to some of the young people in the church who would gather around each Sunday after worship to chat with her, respond to her inquires as to their school, their interests, their plans. She would truly sparkle upon them. Adults also gathered for catch up conversations. And until shortly before this last illness and decline she had continued her card “ministry” for special seasons, birthdays, times of grief and illness, sending to family and friends near and far.

Many words and phrases need to be used to describe this beloved child of God. Here are but a few: joyful, full deep-throated joy, her laugh, her smile, warmth, love of babies, dogs, travel, Duke basketball, decorations for every season of the year, family life and rituals, consummate entertainer, her courage, fought so hard in her health struggles, her love for her friends, her family, her children, and especially her Jim.

Pat Travis’s legacy of love was grounded in her faith. Her life-long favorite hymn was the little chorus learned early in her childhood: “Jesus Loves Me, This I Know!” She lived that love with the sure hope expressed in the words of St. Paul, “whether we live or die, we are the Lord’s,” and in the words of this song: “My life flows on in endless song, above earth’s lamentation…since Christ is Lord of heaven and earth, how can I keep from singing?” Sing on, dear child of God!

In lieu of gifts or flowers, donations in memory of Pat may be made to the Baptist House of Studies scholarship fund at Duke Divinity School, the Watts Street Baptist Church or the charity of your choice.