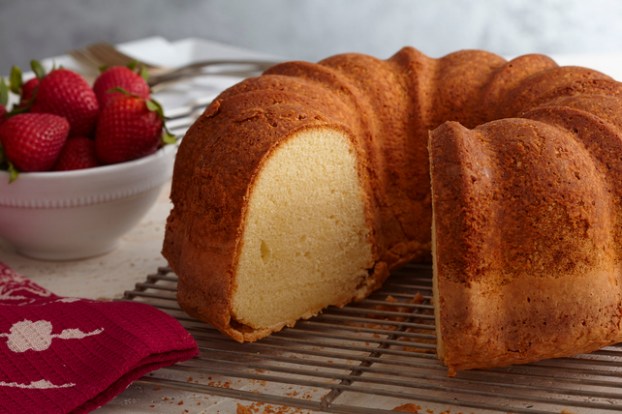 A few moments reflect a lifetime

DW and I enjoyed pound cake with strawberries for breakfast on Tuesday morning, the day after making my mother’s funeral arrangements. I had made her sour cream pound cake a week earlier, but it wasn’t as good as hers. It seemed rather rubbery, a section of the cake broke away from the tube pan as it hung to cool and it was dry. I felt defeated.

I had told her about my failure. She went over the recipe and the directions, still clear in her head, with me, but we couldn’t figure out what happened. Maybe it’s the oven, but she said, always trying to keep things on the bright side, you can serve it with strawberries.

So, we looked on the bright side as we made the necessary plans for our 90-year-old mother’s services.  It snowed Sunday night and on into Monday, seemingly right on cue for she dearly loved watching it fall.  We watched it and thought of her as we went about the business at hand.

Thankfully Thursday looked like a nice sunny day for a graveside service.  And even better, we could have a family gathering at the funeral home for seeing her one last time, sharing thoughts and memories and saying our goodbyes.

The thoughts and memories flowed.  The grandsons all remembered how she loved them as if each one was her favorite.  She attended all of their ballgames and was a fixture at home games in the bleachers wearing her red hooded car coat or in the gym at half court.  MiMi was their personal cheerleader too, always ready with words of encouragement.

And she loved to feed them.  Neighborhood children were welcome, too, and most often came right on in and helped themselves to MiMi’s leftover cornbread.

The younger grandsons commented on how they still missed her after church Sunday dinners, with her boy-approved menu. They reminisced about Schwann’s chicken tenders, cream corn, MiMi’s potato salad, Sister Shubert rolls and all the ice cream sandwiches they could eat.

Our cousin Nancy proudly noted that momma even named a pie after her…the Cousin Nancy pie because she loved it so much.  It’s a recipe I need to find.

Zachary shared a story that his brother, Nicholas, liked to tell. Once when fishing with Mack, their granddaddy, they had life jackets but Mack had said there was no need to put them on.  Nicholas, though, told his grandaddy that MiMi had told them to wear them.  Mack said, well if MiMi said to, then put them on.  I remembered their fish frys. Daddy fileted and fried the crappie and she made the perfect slaw, always.

Momma’s dearest cousin Wanda, who was more like a sister came, too. She spoke of their fun times growing up together, camping in the Smoky Mountains, playing cards, and how she would miss their Saturday afternoon phone calls. Later, old photos of them as playful teenagers and pretty college girls brightened the afternoon and made us all smile.

We talked of family trips to the beach, her beloved kitty, her love of reading, her compassion and patience.  And many spoke of how great a listener she was. She loved a good conversation, not full of gossip but details. Momma was always concerned about what was going on with you, but she also wanted to hear where you’d been, who you saw, what you wore and always, where and what you had to eat.  Hearing those little things helped her to get through the isolation of the past 10 months. She tried her best to stay positive, be happy and was ever looking forward to brighter days.

Grandson Mack wanted to ride in the sheriff’s car that led the funeral procession but we explained to him that pall bearers didn’t ride shotgun with the deputy.  When we arrived at Hillcrest Cemetery, he exclaimed from the back seat, “I didn’t know MiMi had so many friends!” I was touched too.

Momma would have been too, as her seven grandsons and oldest great grandson carried her to the waiting grave. Friends, church family, caregivers and hometown folk surrounded us and lifted us up with their show of love.  My sweet hearted momma would have been pleased, humbled and probably slightly embarrassed. The words the speakers brought were straight from her own notes in her Bible.  She had written, “I will rejoice!”

Thank you for all your kind words of consolation and compassion.  It’s love that lasts forever and for which I am ever thankful as life goes on.  Here’s her pound cake recipe… if it fails, cover each slice with a big spoonful of strawberries and go right on.

1 cup sour cream (do not use fat-free)

Cream sugar and oleo; add egg yolks one at a time. Measure flour, add salt and baking soda, whisking to mix. Add sour cream alternately with flour, beginning and ending with flour. Stir in vanilla flavoring.  In a separate bowl beat egg whites until stiff.  Fold beaten whites gently into the cake batter. Bake in large greased and floured tube pan in preheated 325-degree oven for 1 ½ hours.   Test for doneness with a cake tester.  Cool completely in suspended in tube pan then remove to cake plate.  Makes one large, dense pound cake.  Serve with strawberries in syrup or sliced peaches if desired.

Eureka Columnist I consider myself a fairly intelligent person, with varied interests, who tries to stay up-to-date on current trends... read more