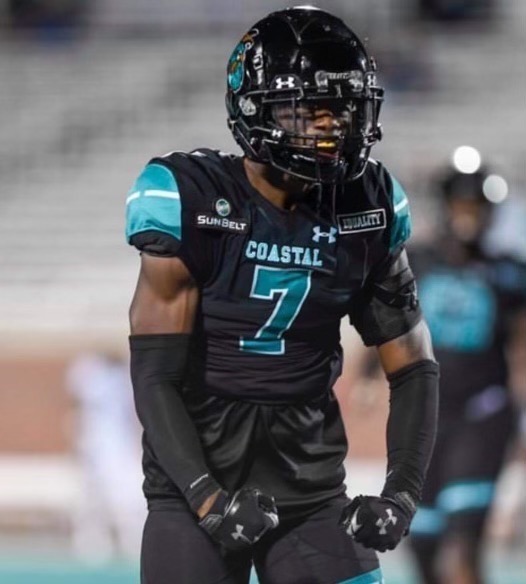 Former SP Tiger D’Jordan Strong had a superb season at Coastal Carolina, and will play in the Mortgage Cure Bowl in Orlando on Saturday, Dec. 26.

A positive note during the pandemic-stricken 2020 college football season is the national spotlight has shone on some teams who normally go unnoticed, but have exceptional talent. One such team is the Coastal Carolina Chanticleers. So far, the Chanticleers have had an outstanding undefeated season at 11-0.

The difference maker for the Chanticleers on the field is Panola County native and cornerback D’Jordan Strong.

The name D’Jordan Strong Is new to many people in the college football world. He is playing his first season in Division One  football, but for South Panola fans hearing his name is nothing new.

He is the son of Caroline Strong and the nephew of Tiffany Strong, both from Batesville. He was known to cause a lot of chaos on the field during his high school football days, playing on both sides of the ball.

Even though Strong wasn’t highly scouted during his time with South Panola, he would continue to leave it all out on the field. He played at Northeast Mississippi Community College where he helped his team become the leader in passing defense with a national low of 126.6 passing yards allowed per game.

Strong was recruited by a handful of Division One college football teams before finally deciding on going to Conway, S.C., to play for the University of Coastal Carolina. He has made a big impact on the team since he joined them.

So far this season, Strong has had five interceptions (including a pick six which helped seal the deal against Appalachian State by a score of 34-23) which is tied as the second most interceptions this year in the nation.

He was also recognized as the “Newcomer of The Year” and first team All-Conference from the Sun Belt Conference. He received a vote from Bleacher Report for the All-American Team.

Although Conway is over 700 miles away from Panola County, Strong has still been feeling the love and support from his friends and family.

“My support base from Panola County is very big.” said Strong. “Everybody back home has been supporting me and tuning in. I even have some of my high school teammates coming up to watch me play.”

Strong has also stayed involved with the community as well. He always talks to his former teammates at South Panola to make sure they are okay. He even reached out to new Memphis football signee and Panola County native, Cam Wright, to give him words of encouragement as he prepares for his new journey.

“I told Cam to be patient and believe in himself.” Strong said. “Cam is going to be really good at Memphis.”

Strong has had to battle some tough situations in his football career, but he has not given up on what he loves to do most. It has certainly paid off for him. He wants his story to remind other high school players to never give up and keep fighting.

“I would tell the high school players who are in the shoes I wore, to put trust in your coaches and have patience in the process. I would also tell them to never give up and always have faith in God and his abilities,” he said.

The Chanticleers will be heading to Orlando, Fla., to face the Liberty Flames in the FBC Mortgage Cure Bowl on Saturday, Dec.26.

The teams were originally scheduled to face off Dec. 5, but had to cancel the game after the Flames’ head coach, Hugh Freeze, tested positive for Covid-19.

Strong is proud of how far his team has made it so far this season and wants to knock off Liberty to finish the season undefeated. He is confident that they can get it done.