‘Tool Man’ Taylor preserving through ups and downs of 2020 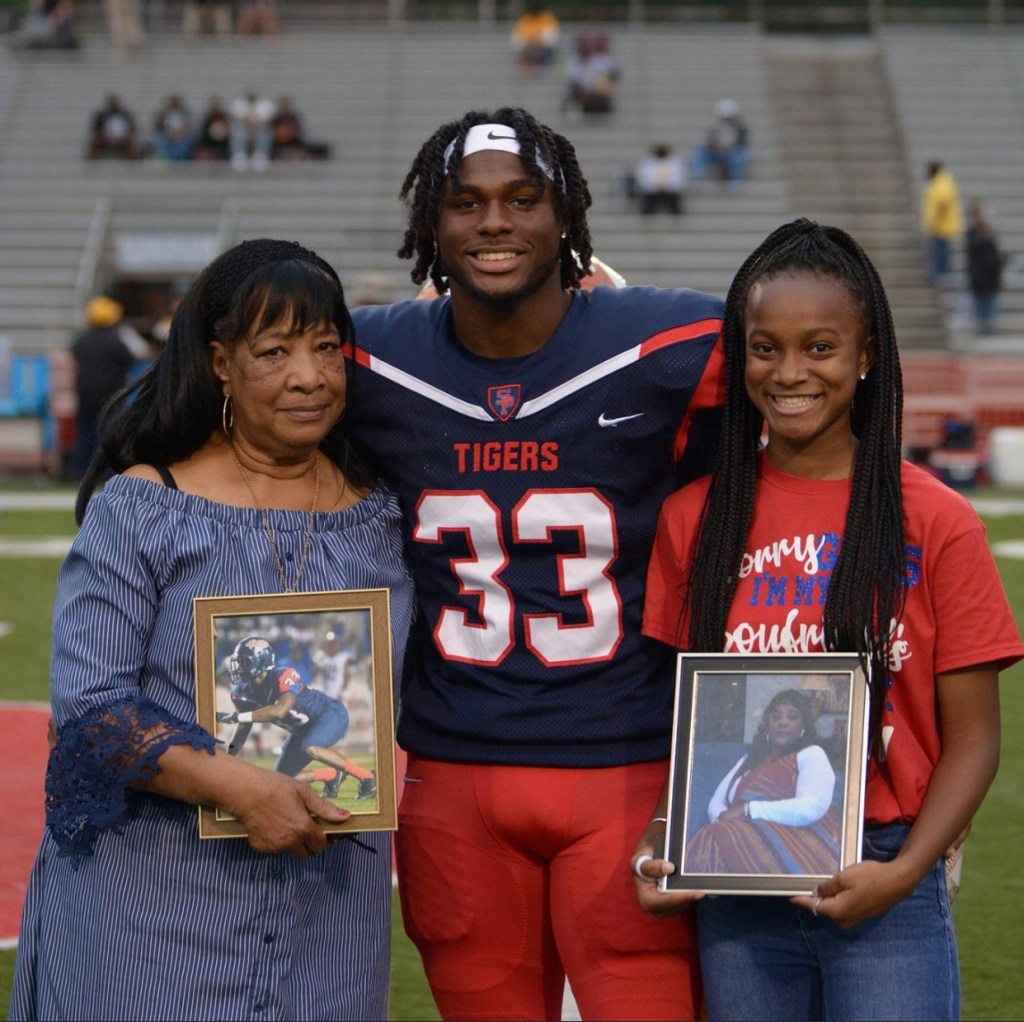 Tymdarreus Taylor celebrated Senior Night at South Panola High School two weeks ago before the Tigers faced off  against Starkville. He is pictured with his grandmother Mablean Henderson and Zykerria Sanford, a family friend.  The framed photo is of the late Robbie Taylor, who passed away earlier this year.

For South Panola High School senior, and linebacker on the Tigers football team, Tymdarreus (Tym) Taylor, this year has been one with ups and downs, but he continues to look for the good in every situation. He has never given up on himself or his family, and has cherished every opportunity he has received so far this year.

Ten weeks ago, even the notion of having high school football in the state of Mississippi was far fetched. As the number of positive coronavirus cases began to rise, the hope of players, fans, and coaches experiencing the traditional football season began to spiral downward.

All  teams were affected in some respect by the coronavirus. Games were canceled, some played but halted due to cases, even whole seasons cancelled before they had a chance to begin.

Everybody who cares about football in the state anxiously waited to see if there would be a season at all; but the amount of stress and hope would be nothing compared to what the seniors felt, eagerly wanting to step on the field again.

One of those seniors was Tym Taylor.

Taylor (6’2”, 190 lbs.) was coming off of a memorable  junior season where he registered 47 tackles, eight of those for losses,  and five sacks in the 2019. He  also had two interceptions and returned one of them for a 72-yard touchdown.

He made his presence known  as he gave opposing offenses trouble. South Panola’s season was cut short after they lost to the Oxford Chargers who would go on to claim their first ever state championship.

With the season coming to an end, Taylor knew that he had to continue to get better in order to get noticed by scouts and college coaches around the country, and he did just that.

He gained more than 20 pounds during the offseason and continued to get stronger and more physical to prepare for the upcoming season. Taylor knew that he wanted to play football at the collegiate level so he would practice any opportunity he could.

When Taylor was not on the field, he worked as a grocery bagger at the Kroger  and would help his family at home. While Taylor was working hard on and off the field, little did he know what was coming to him.

On June 2 of this year, Taylor received a phone call while leaving work. The phone call came from defensive coordinator and linebackers coach Dan Mueller from Lake Erie College, located in Plainesville, Ohio.

Mueller offered him a full ride scholarship to play football and attend Lake Eire. Taylor was very happy to finally pick up his first scholarship offer.

“I was very excited and happy for myself.” Taylor said. “The first thing I did was go straight to my mama and I could tell she was very happy because coming where I’m from, I felt that I needed a scholarship to help [pay for] school. We don’t have it like that, so I wanted to make a way through football so she didn’t have to pay a single penny and there were emotions everywhere in the household.”

Even amidst the COVID-19 pandemic, Taylor was having a really good year. He found extra motivation to continue the hard work he put on and off the field because of earning his first scholarship.

Life seemed to be going pretty well for the upcoming senior until tragedy would strike the Taylor family a few weeks later. Taylor’s mother, Robbie Taylor, passed away on June 30 of heart attack at age 45.

“It was definitely heartbreaking.” Taylor said in an interview, trying to hold back tears. “For it to happen so unexpectedly was really shocking to the whole family.”

Since the passing of his mother, Taylor has had a lot of support from teammates and coaches.

“There were a lot of people who reached out to me after my mother passed, but (teammates) Cam Wright, Trae Norwood, and Zach Brown were the first people who checked in on me to make sure I was ok, and I really appreciate them for that.”

Despite dealing with a family misfortune, Taylor decided to continue with his day to day life. He used his mother’s death as an inspiration to himself and he knows that she is right there with him every step of the way. It has helped him become more mature and South Panola’s linebackers coach Zack Broadaway has noticed.

“Tym has been through so much this year, but he’s never flinched.” said Broadaway. “After eating a pregame meal a few weeks ago, he stayed behind and pushed all the chairs in, cleaned up trash his teammates had left behind, and thanked the staff for hosting us. He then turns around and ends up having seven tackles and a sack during that game.”

It is clear to see that Taylor definitely deserves all the praise and opportunities that come to him. To honor his mother this year, Taylor will continue to wear number 33 on the back of his jersey, even though he considered changing it.

“I was asked to change my number, but because of recent incidents, I decided not to change it. This was the last number my mother saw me play in. Taylor said. “I also make sure that I put her in my pregame prayers before I hit the football field in remembrance of her.”

Even though Taylor’s mom isn’t with him physically, he believes she is now watching over him and is in step with him as he continues to advance.