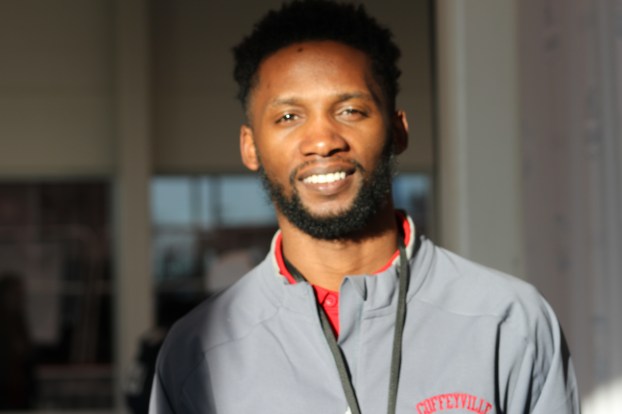 Morrie Turner, a track standout at South Panola High School, is an inspirational leader as a college coach.

For a human being to make a long jump in track and field takes extraordinary muscle strength. Deep breaths, pumping arms, stretching your legs and arms as long as they can manage, all while you propel your body an inhuman distance.

Things haven’t always come easy to Turner, who is now 29-years-old, married to wife Erica Turner with two sons, Morrie and Maddox. He remembers his first track meet, all the way back in the tenth grade.

A full bus and a decision from a coach prevented his performance in the meet, and Turner was sent home. But he didn’t let it deter him – he went back to the South Panola track and practiced until his grandmother, Margaret Fox found him hours later. That’s the kind of work ethic that Turner has – one that pushes him to try again after he’s pushed down.

His grandmother remembers what she said to him when she helps Turner back up.

“I always tell him to stop crying,” said Fox. “You have to get through something before you can get to where you need to be. You have to have a testimony. And now he does.”

Fox has seen Turner through ups and downs in his track career. On her 59th birthday, she visited him in Tulsa at a track meet for Oral Roberts, where she said he made a record jump and won the meet.

Turner strove for greatness in every aspect. His first coach in college, Reginald Dillon of Hinds, allowed Turner to walk on and prove himself as an athlete.

“He’s an overachiever and worked his butt off,” said Dillon. “He was a kid that wasn’t that good of talent out of high school but was a hard worker. Once he passed Hinds, I could see it in him that he could be a successful coach.”

Turner did move on from Hinds to Mississippi State University and then on to Oral Roberts University, where he went on to set a personal record of 25 feet and three inches in long jump. To put that in perspective, the world record for long jump is just over 29 feet. Post-graduation, he became an assistant coach at Hinds, then at Rogers State, and now at Coffeyville.

In the future, Turner said, he sees himself as becoming a head coach of a track team, and eventually maybe even an athletic director. He even mentioned coming back to South Panola, where a few of his siblings still attend and play sports.

No matter what his struggles may have been in becoming a star athlete, Turner overcame to become a role model for his students.

“I feel like my relationship with the students is not just a coach-athlete relationship. I look at every person and reach them on a personal level,” said Turner. “One of my athletes passed, and it changed how I look at them. I value the moment with them rather than expect them to run fast and jump high. I still get mad like a traditional coach, but they understand that it’s a fatherly mad.”

Turner gives out lessons like they’re lemonade, even if it’s not to one of his athletes.

“You only have one home,” said Turner. “Remember where you came from.”

If there’s one thing Morrie Turner can teach us, it’s that to accomplish your dreams, you have to push yourself. When there are no expectations, push yourself. When you get kicked off the bus, run hard and jump long, and you might find yourself somewhere great.

Panola County has remained at 19 positive tests for coronavirus, with one death, in the morning update of statewide numbers... read more