Walmart announces limits on customers in store at one time 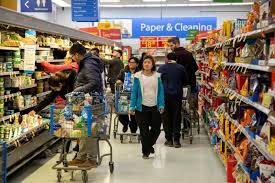 Batesville Walmart was contacted just before store closing at 8 p.m. about a report received at The Panolian of a company mandated limit on customers inside the store beginning Saturday morning. The manager on duty told the newspaper the store has not yet been notified of any new capacity guidelines.

The local Walmart is currently under a capacity restriction of 25 percent of its fire occupancy load. That restriction was put into place by an order of the Batesville Mayor and Board of Aldermen. Large retailers in Batesville – stores with more than 4,000 sq. ft. buildings – were limited to 50 percent of their fire occupancy by earlier board action, and further restricted to the 25 percent on Friday.

The guidelines being reported by the Daily Journal have a customer per square footage calculation that is likely to be similar to the 25 percent of occupancy rule established by the City of Batesville.

Starting Saturday, April 4, Walmart will limit the number of customers who can be in each store at once. No more than five customers for each 1,000 square feet will be allowed in stores at one time.

Walmart stores average around 180,000 square feet, and the company said the new guideline allows stores to reach only about 20 percent capacity.

Floor markers inside stores will keep customers at least six feet apart, according to a release on the company’s website.

Dacona Smith, Executive Vice President and Chief Operating Officer of Walmart U.S., stated in the release, “While many of our customers have been following the advice of the medical community regarding social distancing and safety, we have been concerned to still see some behaviors in our stores that put undue risk on our people.”

Associates will mark a queue at a single-entry door, typically at the grocery entrance. They will direct customers from there, counting them and admitting them into the store one at a time. Once a store has reached its capacity, one customer will be allowed in as another exits.

Customers checking out will be directed to exit the store through a different door than they entered.