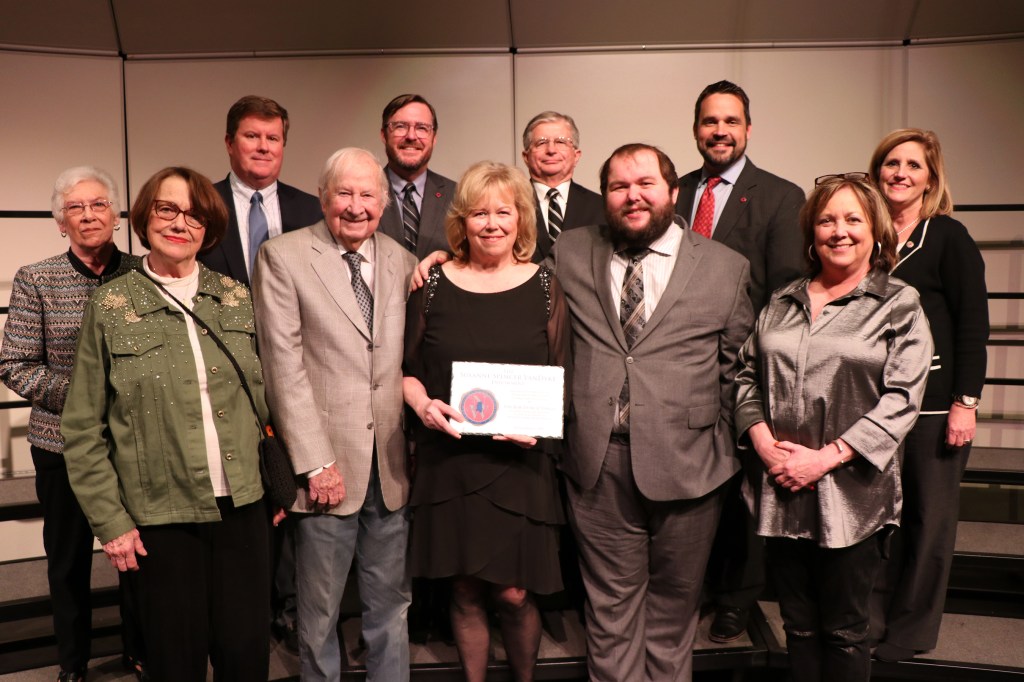 An endowment in honor of Director of Choral Activities Susanne Spencer VanDyke has been established at Northwest Mississippi Community College by the Bobby Dunlap family in appreciation for her years of dedicated service to Batesville Presbyterian Church.

VanDyke was surprised by the scholarship announcement, which took place at the Singers Fall Concert Nov. 21.

VanDyke’s first memory of singing in public was when she was in elementary school in Florida. “I sang ‘God Bless America.’ I had no fear. It seemed a perfectly natural thing for me to do,” VanDyke said.

VanDyke’s path to her music career may have begun at Northwest as a student, but the seed of her love for music was planted early on in her home and in the church.

VanDyke, who has served as director of Choral Activities at Northwest since Fall 1993 will retire in December 2019.

Her father, Dr. Johnny Spencer was a Baptist preacher, and her mother, Nancy Spencer played piano and taught elementary school. She and her sister Gayle Spencer grew up in a house filled with music, and VanDyke started taking piano lessons at age nine.

“There was a lot of music and singing in our house,” she said. Being the child of a preacher caused her family to move around in her early years. She was born in Memphis and lived in Florida, Tennessee and several towns in Mississippi before the family settled in Batesville when she was in junior high school.

“I was very fortunate that the churches my dad served in had wonderful children’s choirs,” VanDyke said.

When they came to Batesville, her father became the pastor of First Baptist Church.

“That church had Richard Smith, a great choir director with a beautiful voice, classically trained musicians and there were wonderful singers in that church. We sang really great music, and it was there I learned to blend and harmonize. First Baptist of Batesville had and still has a great reputation for its music ministry today,” she said.

“Richard Smith really set me on the path to music. He gave me the strong foundation I needed.”

She graduated from South Panola High School in 1976 and decided to attend Northwest. “Everybody I knew was going to Northwest, so I decided to come here,” she said. She started at Northwest studying general college and one day she saw a poster for auditions for the Northwest Singers. “I knew I would love it, so I went and auditioned for Mary Lou Lott. I got into the Singers and the Entertainers,” VanDyke said. Little did she know she would later become the director of both of those groups.

She decided to major in music her sophomore year at Northwest. She enjoyed the variety of the music she studied that included classical, musical theatre, pop music and learning to dance for the Entertainers. She loved studying piano with Becky Triplett, and learning voice from Lott.

After graduating from Northwest in 1978, she went to Delta State University (DSU) and earned her bachelor’s degree in music with an emphasis in voice in 1982. “I wanted to be a musical performer. I loved the stage,” she said, adding that she had no desire to teach at that time. She tried out for a Christian performance group called “Truth” but did not make it. A friend of hers who had gone to Northwest after her was in charge of a group that performed for the World’s Fair in Knoxville. She auditioned and was accepted. After traveling to Europe with Renaissance, DSU’s vocal ensemble, she came back to perform for six months at the World’s Fair.

She returned home and found a part-time job as youth director at a church, playing piano there. Her father wanted her to find a career and convinced her and her sister Gayle to go into real estate.

“We moved to Pearl, and I was terrible at selling real estate. Gayle was a lot better at it than I was,” VanDyke laughed. During that time, she decided to pursue her master’s in music at Mississippi College, where her father had taught when she was a child. She earned her Master of Music in Vocal Performance in 1988.

Unable to find a job in music, VanDyke returned to Batesville and moved back home. “My dad was always getting us into things, and this time he helped us start our little business in Batesville called Spencer’s Catalog Collection. It was a Speigel Outlet store. Again, I was terrible at retail, but Gayle was very good at it,” she said.

After a year, she found a job teaching music at North Delta School. She was able to teach piano and choir and did some musicals with the students. She was in the play “Nunsense” and was standing outside the theater when a teacher from Northwest, Mary Catherine Koeppel (now McHenry) passed by. She told VanDyke that there was a job in the Fine Arts Department at Northwest, and that she should apply for it.

“I met and interviewed with Rosemary Simmons, who was the director of the department. “I wanted the job so badly that when she called the next day, I let it go to the answering machine. When I heard her say that she had good news, I knew I had the job,” VanDyke said.

She started in August 1993 directing the Singers and Entertainers, and teaching music, theory, voice, music history and recital classes. On Thanksgiving of that year, she gave birth to her son, Spencer and missed her first concert, which was scheduled the following Thursday.

She feels that she was very fortunate to be able to take post-graduate courses in choral conducting with Dr. James Jordan at Westminster Choir College in Princeton, New Jersey. She considers Jordan to be her mentor.

In 2000, she suffered a stroke related to a genetic condition, and decided that she needed to take something off her plate at Northwest, so she gave up the Entertainers group. She started a Chamber Choir and brings them and other small groups to community events as outreach.

VanDyke credits her mother Nancy for giving her the ability to persevere in both her career and in life. “It was her prayers, care and support that gave me the ability to persevere through the ups and downs of life. She was and is a big influence on my life, teaching me by her example as an elementary school teacher how to encourage my students and bring out the best in them,” she said.

Among her Northwest influences, she lists her directors Simmons, Dr. Ken Sipley and John Mixon. “They all have different styles, and I have learned so much from each of them. I also have to thank Dr. Marilyn Bateman for hiring me and being such a great support and Jo Ellen Logan, who I enjoyed working with on the musicals. I learned so much from her,” VanDyke said. Aside from Jordan, she also gives credit to Gene Ayers at Delta State and Dr. Gerald Claxton at Mississippi College, who she says helped her develop her voice.

One person who has had a profound effect on VanDyke is her friend Sybil Canon, retired associate vice president of Development and Special Projects at Northwest. “Sybil Canon has been such a tremendous source of strength for me. I have just felt nurtured and cared for and appreciated by her. She gave me a lot of confidence – more than she ever realized. She is the person who always knew I could do it, even if I didn’t believe it,” VanDyke said.

VanDyke’s other musical and choral accomplishments include being featured in “Who’s Who Among America’s Teachers” and serving as a contributor to the book “The Musician’s Spirit” by Dr. James Jordan. She is past president of the State Community College Choral Association as well as a member of American Choral Directors Association, where she serves as two-year college chair on the Mississippi ACDA state board as well as being an active member of the National Association of Teachers of Singing (NATS). Many of her voice students placed in the top three positions in state NATS competitions throughout the years.

In 2013, VanDyke was awarded the prestigious Sandy Grisham Excellence in Teaching Award for her innovation, excellence and commitment in teaching music and in directing choral activities at Northwest. She is also currently director of Music Ministries at Batesville Presbyterian Church.

In the past she also served as vocal director for Northwest musicals and in this position has directed “Cats”, “Joseph and the Amazing Technicolor Dreamcoat”, “Smoke on the Mountain,” “Sanders Family Christmas”, “Little Shop of Horrors,” “Fiddler on the Roof,” “Man of La Mancha” and many others. She also served as vocal coach for the community theatre premiere of “Les Miserables” produced by Panola Playhouse.

“I am so grateful and thankful that I got to be a part of Northwest. I have never felt infringed upon as a teacher or felt that my freedom of choice in a teaching technique or in music selection has been taken away. My students have been my greatest joy and have made me a much better teacher and person than when I started this journey,” VanDyke said.

For information on how to contribute, please contact Patti Gordon, executive director of the Office of Institutional Advancement at pgordon@northwestms.edu or 662-560-1112.