Season on the line for Tigers in Oxford 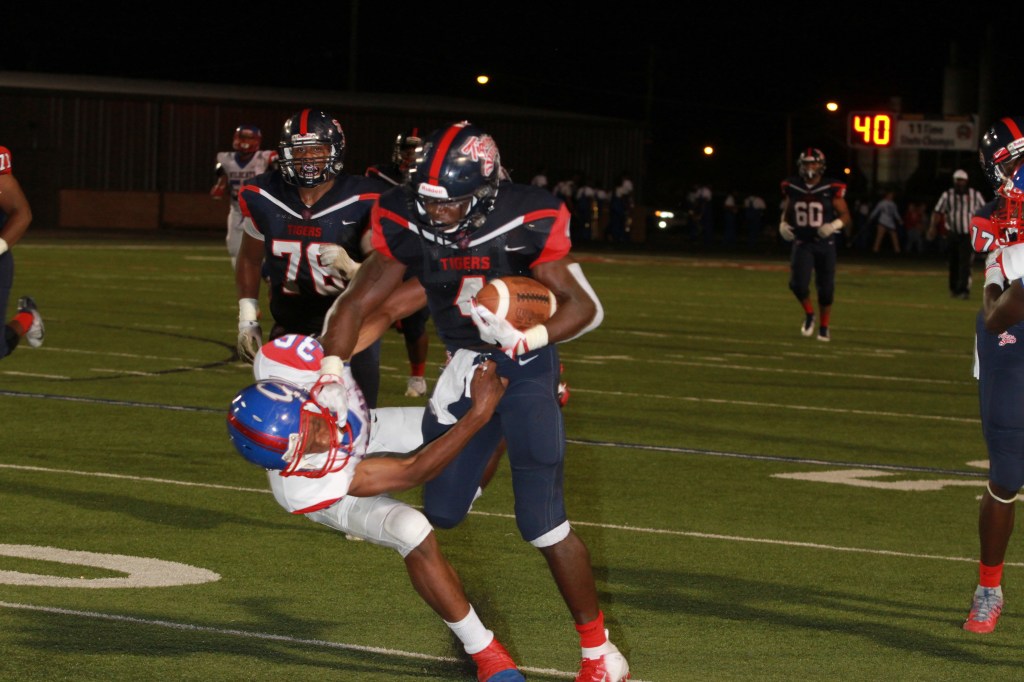 Janari Dean runs over a Clarksdale linebacker in a game earlier this season. Dean and the Tigers play in Oxford  Friday night in second round playoff action. (Andy Young)

When evenly matched football teams play, the game is usually decided along the offensive and defensive lines.

That could very well be the case as the state’s top scoring team, South Panola, travels 25 minutes east to take on the Oxford Chargers in the second round of the Class 6A State playoffs in a 7 p.m kickoff Friday.

South Panola enters the game 12-1 while the Chargers are sporting a 11-1 record.

The winner of tonight’s game will take on the Starkville/Olive Branch winner next week for the North State championship.

Oxford, winner’s of 10 games in a row, has allowed a  6A state-best 12 points per game on defense, and is coming off a 33-14 win over Warren Central last Friday.

The Chargers lone loss was to Starkville 45-17 in week two of the season.

The Chargers average 296 yards of offense per game with senior quarterback John Meagher leading the way.

Meagher on the season has passed for 1,422 yards and 13 touchdowns with nine interceptions and is also the team’s leading rusher with 752 yards and 10 touchdowns.

Highly recruited J.J.Pegues is one of many weapons on the Charger offense as the 6-foot-4,280-pound senior has 11 rushing touchdowns to go along with 486 yards receiving and four touchdowns.

Other offense weapons include, senior running back K.J Wadley (77-339) and Omar Howell (92-356). Dekyren Johnson lead the receiving corps with 26 catches for 357 yards.

The Chargers will look to contain a Tiger offensive juggernaut that has put up 39 points per game. South Panola disposed of Tupelo 39-23 last Friday.

Dandy Dozen running back Janari Dean ran for 254 yards and three touchdowns in the Tigers victory over the Golden Wave.

Dean on the season has amassed 1,568 yards and 15 touchdowns.

Jordan Milton and Tymdarreus Taylor have recorded five sacks each for the South Panola defense.