NP comes up short against Independence 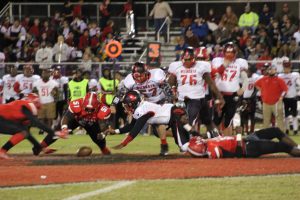 Kylan Garrett rushed for 230 yards and two touchdowns as the Independence Wildcats left Sardis with a 21-12 Region 2-3A  victory over North Panola Friday night.

The Wildcats improved to 6-3 overall and 2-1 in district while North Panola fell to 1-2 in region play and 6-2 overall.

Independence responded with a 71-yard scamper for Garrett to give the ‘Cats a 7-6 lead at halftime.

The Wildcats extended their lead to 14-6 as the second half got underway when quarterback James Rodgers connected with Trey Newson on a 47-yard scoring pass.

The Cougars closed the margin to 14-12 in the third quarter when Davonta Pratcher found the end zone from 10 yards out. The two-point conversion try to tie the game was unsuccessful.

That would be as close as North Panola would get as the Wildcats added another touchdown late in the third quarter for the final margin of victory.

Independence out-gained North Panola 276 to 196 in total yardage.The ‘Cats rushed for 229 yards and threw for 47.

North Panola registered 124 yards passing and 72 yards on the ground.