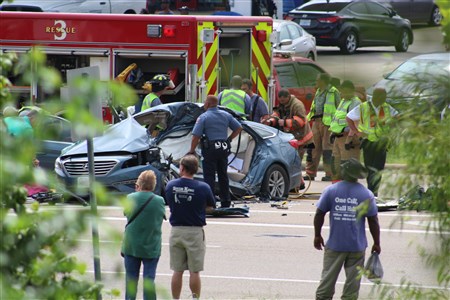 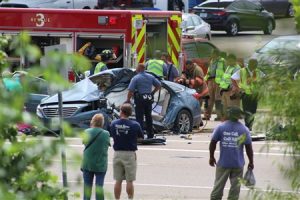 Staff report
A woman was pronounced dead last Friday morning at Merit Health Medical Center after being extricated from her automobile following a collision with a large truck at approximately 11:10 on Highway 6 East at the Walmart intersection.
Batesville Assistant Police Chief Jimmy McCloud said the woman’s car was pulling onto Highway 6 from Medical Center Drive when the collision occurred. McCloud said he thought the driver of the truck was not seriously injured.
Those witnessing the aftermath of the collision said the truck carried the car quite a way before it would finally come to a stop in front of Marathon Convenience Store.
The east-bound truck hit on the driver’s side of the vehicle, trapping the driver, Anquinette Cannon, inside, according to witnesses who said medical responders were giving IV fluids to the victim through an opening while Batesville firemen were preparing to cut away the mangled metal to extract her from the car.
McCloud said the local air ambulance service was already involved with a call and another helicopter was called from Oxford.
“They could not get her stable enough to fly,” McCloud explained, after the neighboring helicopter arrived, so she was taken by ground ambulance to nearby Merit Health Medical Center where she was later pronounced dead.
Felix Cauthen funeral home has charge of funeral arrangements.