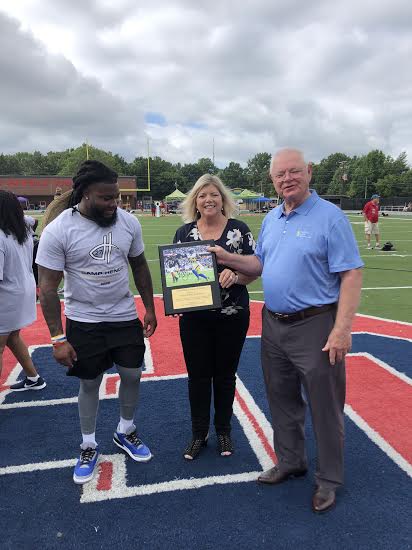 Darrell Henderson, Jr., was presented with a plaque of appreciation before the start of the youth football skills camp he sponsored at no cost to participants on Sunday, July 10, at Dunlap Stadium. Presenting the plaque was South Panola South District Trustee Sandra Darby and Mayor Hal Ferrell. The Mayor had asked the Board of Aldermen to declare Feb. 13, 2022, as Darrell Henderson, Jr., Day in Batesville after the former South Panola standout won an NFL championship ring when his Los Angeles Rams won the Super Bowl. Henderson helped the South Panola Tigers win a state championship with an overtime touchdown against Oak Grove in 2014, and was named a Parade All-American following the season.