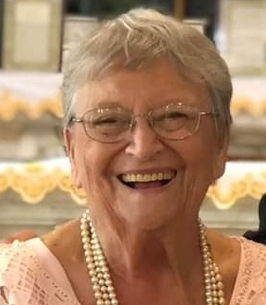 Darthy Jean Campbell Baker, 84, passed away on Tuesday, May 17, 2022, at her home in Coldwater. She was born on May 7, 1938, in North Carolina, to Addie Taylor and William Louis Campbell.

Darthy grew up in Fuquay, NC, where she met her husband, Fletcher. She worked in radio and television in Fequay and Raleigh, NC until Fletcher joined the Air Force. Over the years during his enlistment, they lived all over the United States, including Washington D.C., where she worked in the Pentagon.

She enjoyed her flower and vegetable gardens, connecting with old friends and studying her Bible.
Dartha was a member of St. Theresa-Little Flower Catholic Church in Memphis. At eighty-one years of age, Dartha converted to Catholicism. She considered her conversion and her new relationship with the Lord, the greatest joy of her life. Her life was devoted to her Lord, family, neighbors, and friends.

A memorial service will be announced by the family later. Memorial donations may be sent to St. Theresa-Little Flower Catholic Church, 1644 Jackson Ave, Memphis, TN 38107.