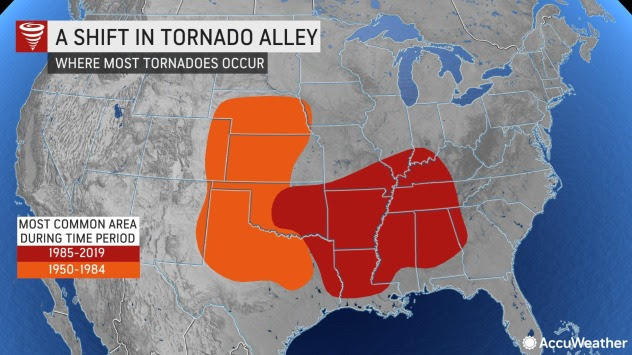 On average, 1,200 tornadoes hit the United States each year, according to the Storm Prediction Center (SPC), and while twisters can happen at any time and in any state, the prevailing wisdom has held that most of the large twisters occur in Tornado Alley, an expansive area within the central U.S. designated by meteorologists in the mid-20th century. That definition may be changing.

Since then, the term has stuck around as a way to describe the area that encompasses parts of Texas, Oklahoma, Kansas, Nebraska and South Dakota, where it was believed tornadoes are the most frequent.

With powerful tornadoes decimating areas in the Midwest and the southeastern U.S. over the past 20 years, there now may be a reason to believe that Tornado Alley has shifted east.

“When you look at the trends in where tornadoes have occurred in recent years, it’s very clear that there have been more tornadoes farther south and farther east away from what people have typically known as the Tornado Alley across the Plains,” AccuWeather Chief Meteorologist Jonathan Porter explained.