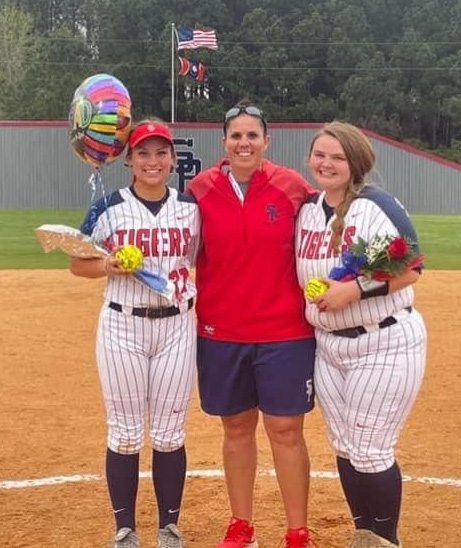 The South Panola Lady Tigers wrapped up a busy week on the softball diamond by winning the Morris Hunter Memorial tournament over the weekend in Southaven.

The Tigers fell behind 1-0 before scoring eight runs in the top of the fourth inning to finish the tournament unbeaten. Gracey Harbour picked up the pitching win, giving up two hits and one unearned run while surrendering two hits and fanning two.

Harbour helped her cause at the plate with a three-run triple in the fourth as South Panola sent 12 batters to the plate in the inning. Hailey Heafner added a RBI double in the frame and the Tigers took advantage of four walks and one error.

Jolie Avery’s RBI groundout with one out in the bottom of the fourth inning gave the Tigers a come-from-behind victory. Harbour led off the inning with a single then scored on Nia Fondern’s triple that tied the game at 1-1.

Following a strikeout for out number one, Avery hit a ground ball to second to score Fondren with the winning run.

Sadie Bright earned the win in the circle by giving up one run on three hits and fanning five. Caitlyn Moore also provided a single in the victory.

The Lady Tigers scored all the runs they would need in the top of the fourth on three hits as Harbour retired the first nine batters she faced before giving up a lone single in the bottom of the fourth.

Harbour also singled and doubled to pace South Panola at the plate.

Grady Beck Wilson delivered a two-run pinch hit double in the fourth inning while Avery reached on an error that brought in two runs in the frame. Makenzie Houston and Hailey Heafner added singles and Addison Sanders scored in a courtesy-running role.

The Tigers had no answer for Lewisburg’s pitching as South Panola was limited to two hits. Makenzie Houston scored the only run for South Panola in the third inning on a Fondern double. Harbour registered the other hit with a first inning single.

Harbour and Sadie Bright pitch three innings each for the Tigers as Harbour gave up six runs (three earned) on seven hits and one walk and strikeout. Bright meanwhile fanned seven on three hits and four unearned runs.

South Panola improved to 2-0 in district with a rout of the Eagles on Senior Night. The Tigers scored two runs in the first before batting around the order in the second and third innings to give Bright plenty of run support.

Caitlyn Moore, one of two seniors honored before the game, provided two singles and scored twice. Harbour drove in three runs with a two-run double and groundout.

Nia Fondren added a double and single while scoring two runs. Addison Sanders registered a triple with Avery adding a single. Houston reached base and scored three times as Wilson scored twice. Bright finished the game with five strikeouts on one walk.

South Panola jumps back into district play Friday at Southaven before taking on East Central High School at Oxford Saturday.