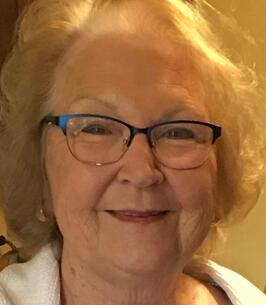 Immediately after her birth, the family moved to Sledge,  where they lived until Peggy was seven years old and the family moved to Batesvill. She attended Batesville High School, where she was a class officer, a majorette in the band, and played saxophone in the Lions Club Band.

Peggy and her husband, Charles, lived in Southaven, where they raised their family. She was an active member of DeSoto Hills Baptist Church, where she was a member of the Church Orchestra. She also played Saxophone in the Olive Branch Community Band For 35 years, Peggy was employed, as a legal secretary for the Winn Brown, Jr. Law firm. She was very active in the Southaven community for over 60 years.

Among her involvement and many community activities, she was a member of the Southaven Chamber of Commerce, where she served as Treasurer; a member of the City Beautification Committee; was a Master Gardener and former President of the Heritage Garden Club. Peggy also served on the Inaugural Board of Directors for Southaven Springfest, was Co-Chairperson of the Miss DeSoto County Scholarship Pageant and Southaven Police Department VIPS – Volunteers in Police Service.

In 2000, Peggy was named City of Southaven “Woman of the Year”. On Arbor Day 2017, she was honored with the designation of “Peggy Young Day”, by the City of Southaven and a tree was planted in her name, at the Snowden House Arboretum, which she helped to establish.

Peggy was a relentlessly positive and graceful force for good in her family and her community, a shining star. She was a major sports fan and a terrific cook. She loved to travel and visited over a dozen countries and most of the states. She will be missed by all who had the good fortune to know her.

Funeral services will be held at 11 a.m., on Tuesday, Dec. 28,  at DeSoto Hills Baptist Church in Southaven. Visitation will be held on Tuesday  from 10-11 a.m. at the church. Interment will be in Pleasant Grove Cemetery, near Sardis.

The family has requested memorials in Peggy’s memory be sent to DeSoto Hope.