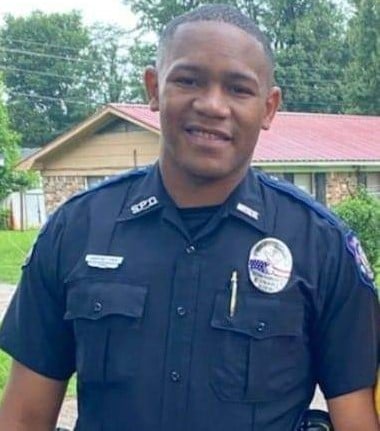 Area law enforcement personnel and others paid tribute to Courtney L. Pride, 27, with a Sea of Blue procession from Cooley’s Mortuary through Batesville last Thursday evening before the fallen officer was laid to rest at the Armstrong Street Church of God cemetery on Saturday, Oct. 23. Church pastor Rev. Terry Townsend officiated.

Pride was killed Saturday, Oct. 16, in a one-vehicle crash on Hwy. 61 in Tunica County about 5:30 a.m. He was driving to Army National Guard duty at the time of the accident.

Pride was an officer with the Mississippi Department of Public Safety. His law enforcement career also included past service as a deputy in Yalobusha County and an officer in the Sardis Police Department, where he was named Officer of the Year in 2020.

Sardis Police Chief Chris Franklin said Pride had resigned his position in Sardis when the state would no longer allow officers to work part-time jobs. “We sure didn’t want to lose a good officer, and Officer Pride was definitely a good one for every department he worked for. I know here we really missed him because he was so well liked across the community and he always was a good police officer in every aspect.”

“He didn’t get Officer of the Year because he wrote the most tickets, it was because he knew how to enforce the law and keep public safety first while being easy for the people to talk to,” Franklin said. “Just last year he saved a woman’s life here because he knew how to react quickly and perform CPR. He was a good officer and it’s a loss for all of Panola County.”

Pride was a member of the Army National Guard and the Air National Guard. His most recent military service was with the 164th security forces patrolling and protecting the Memphis International Airport.

Pride was born in Clarksdale to Courtney Nikon Pride and Kenya Renee Stewart. He was reared by his grandparents, Mark Pride Market and the late Charles Market, Jr.

In September, 2020, he married Talasia Johnson, and the couple had one child, Courtney LaKendrix Pride, Jr.

He was a faithful member of Armstrong Street Church of God.