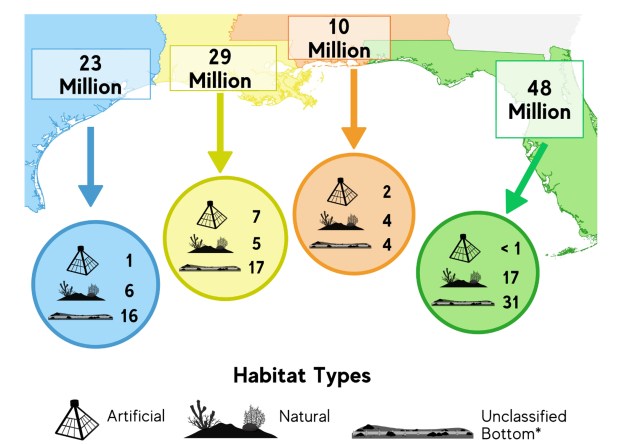 Region and habitat-specific red snapper population estimates resulting from the Great Red Snapper Count are broken down in millions. The final numbers from the survey indicate an overall population size of 110 million red snappers in the Gulf. (Graphic by Emily Seubert and Catherine Cowan/MSU Extension Service) 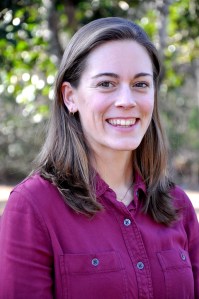 BILOXI  – The results of the Great Red Snapper Count are in!

In 2017, a team of fisheries experts began a two-year task of estimating the population size of red snappers in the U.S. Gulf of Mexico through this unprecedented, federally funded $12 million project. Scientists from several Southeastern universities and institutes, including Mississippi State University, used a variety of methods across the Gulf to accomplish this ambitious goal.

Final numbers indicate an overall population size of 110 million red snappers in the Gulf. In comparison, the most recent National Oceanic and Atmospheric Administration assessment, which was completed in 2018, estimated a population size of just 36 million fish.

This difference was driven primarily by the Great Red Snapper Count team’s ability to survey large portions of the Gulf of Mexico not previously surveyed by NOAA, given limited resources. These areas of open seafloor are also known as unclassified bottom and consist of vast expanses of sand and mud, along with features like extensive, partially buried oil and gas pipelines.

In addition to areas of unclassified bottom, the team also investigated artificial and natural habitats — locations where red snappers gather and are commonly targeted by commercial and recreational fishermen. The estimates from these areas are in close agreement with NOAA’s assessment.

The Great Red Snapper Count results reveal that there may be roughly three times more red snappers in the U.S. Gulf of Mexico than we once thought, which is great news.

Moreover, the impressive number of red snappers residing over unclassified bottom represents an important discovery. It’s possible that these fish may help to replenish the reef populations so that those areas of artificial and natural structure can continue to sustain high levels of harvest.

The findings from this project may fundamentally change the way the Gulf red snapper fishery is assessed by federal and state officials. For example, Great Red Snapper Count results will be incorporated into the next Gulf of Mexico red snapper assessment, which is currently in progress.

Results of the count are clearly impressive, but exactly how these results will affect commercial and recreational fishermen is less apparent. In particular, it’s unlikely that quotas or bag limits will be tripled. Since Gulf red snappers are still under a rebuilding plan, and harvest from artificial and natural habitats is very high as confirmed by the Great Red Snapper Count team, more red snappers doesn’t necessarily mean more harvest.

One thing is certain: Fisheries managers responsible for making decisions about Gulf of Mexico red snappers will move forward cautiously to ensure that the results of decades of diligent rebuilding efforts are preserved.

For more about the Great Red Snapper Count, including fact sheets, videos and the final report, visit SnapperCount.org.