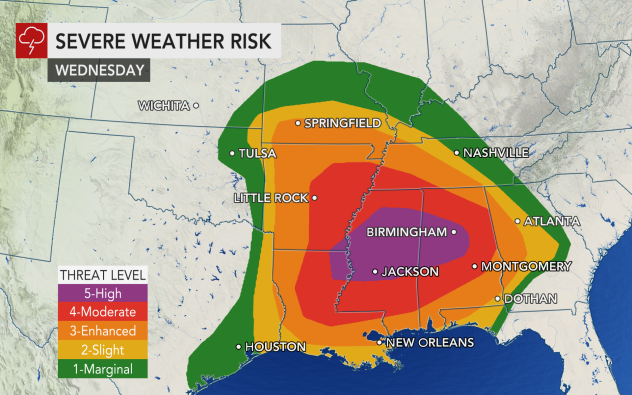 AccuWeather forecasters continued to warn on Wednesday that a dangerous, multi-day severe weather outbreak was unfolding for a large part of the country with the likelihood for numerous violent and long-tracking tornadoes to touch down. Another factor that could add to the life-threatening nature of the eruption of damaging thunderstorms is the potential for severe weather dangers, including tornadoes, to continue well into the nighttime hours.

Soon after sunrise on Wednesday, the National Weather Service had issued a slew of tornado watches and warnings from northeastern Texas to northern Mississippi and southwestern Tennessee.

The NWS Storm Prediction Center (SPC) issued a “high risk” outlook, which isn’t an official warning in NWS parlance but amounts to one, for the severe weather potential across parts of northeastern Louisiana, far southeastern Arkansas, Mississippi and Alabama into Wednesday night. That’s the highest level on the agency’s five-tier severe weather alert system — and it is reserved for days on which significant severe weather is expected. Cities in the high risk area include Birmingham, Tuscaloosa and Hoover, Alabama, as well as Jackson and Meridian, Mississippi. The population in the high-risk area is more than 2.8 million, according to the SPC. It was also the first high-risk advisory to be declared during the month of March since 2012—or in nine years. The last time a high-risk area was predicted by the SPC was in May 2019.

All facets of severe weather are predicted, including large hail, flash flooding and frequent lightning strikes in addition to damaging straight-line wind gusts and tornadoes, into Thursday night.

The severe weather and tornado threats from Atlanta on west may come in two rounds into Wednesday night. The first round will ignite as warm and humid air surges into the region. The second round will be triggered by a cold front along which storms are likely to organize into a solid line, referred to as a squall line by meteorologists, that will march eastward.

“The level of risk for forecast severe weather and tornadoes depicted at midweek is something you may only see a handful of times in a lifetime,” AccuWeather Chief On-Air Meteorologist Bernie Rayno said, adding that in addition to unleashing all modes of severe weather, there’s another aspect about this outbreak that has meteorologists particularly concerned: “Severe weather will be lingering long after sunset.”

AccuWeather Local StormMax™ wind gusts of 80 mph are predicted in the strongest storms into Wednesday night — and forecasters warn the winds may be almost as dangerous as tornadoes. Winds of that magnitude are Category 1 hurricane force. On Thursday, gusts of 70 mph will be possible. Roof damage, blown-out windows and crashing trees can be caused by fierce winds in lieu of tornadoes and for that reason, people should take severe thunderstorm warnings as seriously as tornado warnings.

The outbreak will put 22 states in the line of fire and more than 100 million Americans at risk.

Into Wednesday evening, the likelihood of severe weather that includes the risk of tornadoes, which can be strong and long-lived, will focus from Louisiana and Arkansas to middle Tennessee and western Georgia with much of Alabama, Mississippi and western Tennessee in the crosshairs. A secondary pocket of severe thunderstorms is anticipated in the eastern parts of Oklahoma and Kansas to southwestern Missouri.