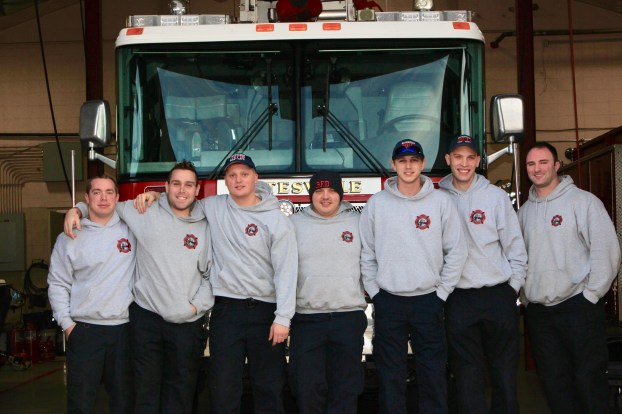 The Batesville Fire Department saw growth in 2020 and has major plans for this year, including a new fire station on Van Voris Street. Some of the Batesville firemen at Station 2 are (from left) Joseph Barlow, Stephen Sarkis, Hunter Stanford, Taylor Haynes, Sean Copeland, Grant Thompson, and Garrett Radicioni. (Allen Brewer)

After wrapping up an unprecedented 2020, the Batesville Fire Department is looking forward in 2021 to the opening of its new fire station and adding additional firefighters to staff it.

Chief Tim Taylor the department is “excited about getting a fire station built.” Taylor, who has been chief of the department since 1990 said the agency has “been after it for 15 years trying to get something done.”

The station, which will be located in the oldest section of town on Van Voris St. is sorely needed, he said.

“We get more fire calls in that area than anywhere else in town. Last year, every structure fire call that was answered inside the city, what we called a working fire, was in the zone of that station. That proves the point that the station was needed in that area,” he said. The homes and buildings in that portion of the city are older, and the type of construction and wiring, which often predate modern building codes, make the buildings more prone to fires.

The new station, which will be staffed with career firefighters on call at the station 24-hours a day, seven-days-a-week, as opposed to the “dwindling number of volunteers,” who now work out of the station that will be replaced, will reduce response times to those fires. This in turn will enable firefighters to more quickly extinguish the fires, reducing the risk for the loss of property and life.

Taylor called the new station part of the city’s ongoing “growing pains of going from volunteer to a combination to a career fire service.” As the town grows that’s where it needs to go. It will improve fire protection for people on that side of time,” he said, adding he expects current response times to be reduced by more than half when the new station comes online.

The station being replaced currently can’t house firefighters full time because there is no room for sleeping quarters, Taylor said. In the future it will likely be turned into an equipment storage area.

The BFD will also be hiring six new firefighters to staff the station, they will be brought on in October, according to Taylor. When they are hired, the BPD will have 27 firefighters on the operations side and five administrative fire officials.  Taylor noted the BPD is looking for “real good, quality people,” to hire into the service.

Those new firefighters will join a family, in their new house, he noted. “You’re adopted into a family, those guys you have to work with, you ride a truck with them, eat in the same kitchen, watch the same tv. They are living with a new family for a third of their life. Twenty-four hours, a third of their life,” he said noting, a firefighter might be good at his job but if he doesn’t get along with other people “that doesn’t work too good.”

The new station will have some modern perks, Taylor noted. The current station in that part of town was retrofitted into a fire station, it was previously a station shop for the Tallahatchie Valley Electric Power Association.

The station will be broken into two distinct areas, Taylor added, one section will house the firefighters and the equipment while the other will house administrative officers for the fire department as well as the city’s public works department. There will be new conference rooms and a “real nice training room,” which will be shared by BPD too.

An end of the year report compiled by Taylor showed firefighters responded to a handful of fewer calls than the previous year, of which 309 were within the city and 61 were in the county. December was the busiest month, with firefighters responding to 37 calls.

The most frequent call the department received were automatic alarms, responding to 110 throughout the year. Vehicle accidents were the second most frequent call, with firefighters responding to 72 such calls. Good intent calls followed with 35 calls. There were 32 building fires in 2020, 29 vehicle fires, 15 cooking fires, 13 electrical fires and six dumpster or trash fires.

Firefighters were called to provide general assistance 15 times and answered eight calls for gas and oil spills. There were six false calls throughout the year and 10 calls were cancelled while firefighters were already in route.

Firefighters logged more than 2,800 total man hours over the course of the year, responding to 370 calls for service and completing approximately 6,000 hours of training.

BPD continued its robust community outreach, logging 2,441 contacts with adults and children despite the closure of its Fire Safety Training during the year due to COVID-19. The department also provided 193 smoke alarms to residents.

During the year it also inspected 760 fire hydrants, performing flow tests on 205.

As of Sunday afternoon, the state’s data said 3,683 Panola County residents have tested positive for Covid-19 since March 11,... read more