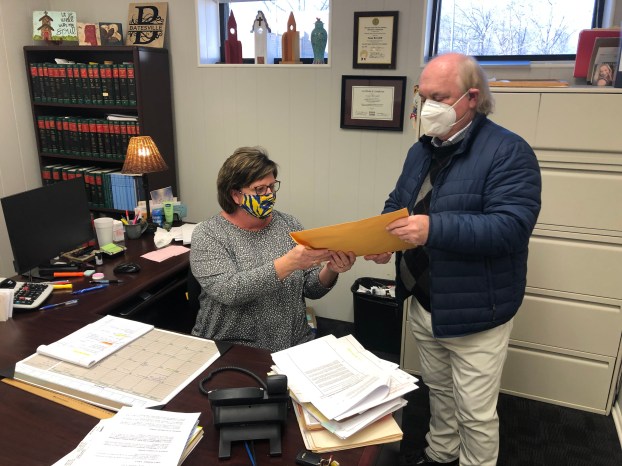 Monday was the first day candidates could qualify for this year’s Municipal Election, and City Clerk Susan Berryhill said just one citizen picked the necessary paperwork.

Anyone  interested in running for city office has until Feb. 5 at 5 p.m. to return completed paperwork to the Batesville City Hall. The deadline is earlier than usual because the 2021 election cycle will begin a month earlier because the State Legislature made the change in 2017.

This year’s party primaries will be held April 6 and runoffs will be April 27. The general election will be June 8. All registered voters will be allowed to participate in the voting for municipal positions, as long as their registration was completed at least 30 days from the date of the election.

Voters will cast ballots for mayor, alderman for the ward they reside, and an at-large alderman. The city’s Municipal Judge and City Clerk are appointed positions and have no elections.

Berryhill said candidates wishing to pick up paperwork need to call City Hall for an appointment due to the strict pandemic safety measures being taken by the city. Filing fees are $10 for candidates wanting to run in the Democratic or Republican primaries.

Independent candidates have no filing fee, but are required to submit a list of 50 signatures of registered voters who are residents of the ward in which they hope to be elected, or from the whole populace if they seek a city-wide office.

Once the Municipal Election Commission approves the candidates’ paperwork, their name will be forwarded to the City Clerk for placement on the official ballot.

The last day to register to vote in a city election is 30 days before the date of the election. Voters may participate in either the Democratic or Republican primary April 6, but may only vote in the same primary if there is a runoff needed. Voters can cast ballots in a runoff without voting in the first round, but cannot switch parties.

Independent candidates have no primary and will appear on the general election ballot along with the winners of the parties’ voting.

Almost all city officials have run as Democrats in the past, but a straw poll of several of the incumbents indicate they are thinking of choosing to be Independent candidates, citing “what happened to David Garner” as the reason.

Longtime Panola County Tax Collector/Assessor David Garner was narrowly beaten in the Democratic primary in 2019 by O’Dell Draper, Jr., when a large number of Garner’s supporters chose to vote in the Republican primary to have the opportunity to vote for, or against, Gov. Tate Reeves.

Had Garner run as an Independent, many local observers believe, he would have easily beaten Draper in the General Election when voters would be allowed to vote for Democratic, Republican, and Independent candidates for the various offices.

Most of the current elected officials in the City of Batesville confirmed this week they will be seeking re-election to their current seat. Ward 1 Alderman Bill Duggar said he is leaning toward running for a seventh term, but has not made a final decision.

Harrison and Autrey, and perhaps other candidates who have qualified for the Democratic primary in the past, are considering running in either the Republican primary or becoming Independent candidates.

Autrey said he is upset with the national platform of the Democratic Party and doesn’t like to be identified with a group that does not hold his conservative values.

Autrey said this is likely his last campaign for office, and hope to win re-election to see two major projects finished before his political retirement.

“I want to see The Concourse up and running because we have worked so hard on getting it here, and I really want to see if we can build a multi-purpose community building with basketball courts and meeting rooms for the west side of Batesville,” Autrey said. “With the new fire station on Van Voris and the other improvements to that area, I want to see us build something really nice for that area. We have room to build something that will really improve the area and give our citizens a community center they can be proud of.”

Resolved to throw away the little strings

Mt. Olivet News What a wonderful Christmas I had in spite of the exceptions that we had to make. Rather... read more