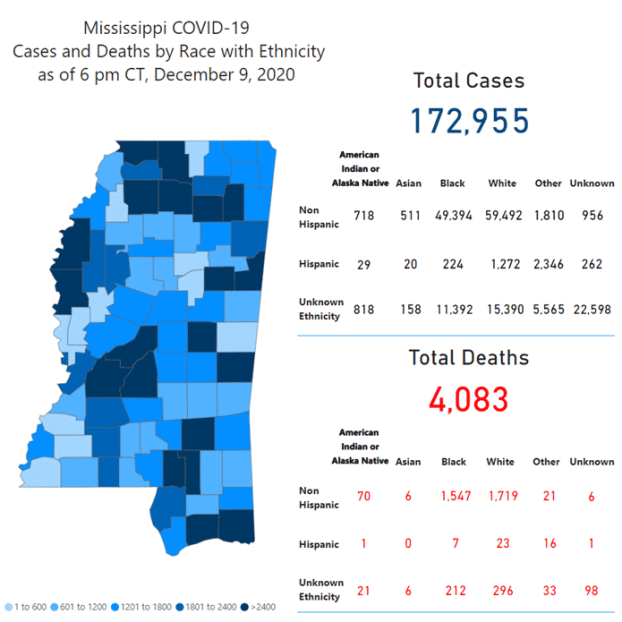 Panola now at 60 Covid deaths; 8 in the past two weeks

Panola County has lost 8 citizens to Covid-19 in the past two weeks, and another 340 have tested positive for the coronavirus that causes the disease.

As of Wednesday evening, the Mississippi State Department of Health has recorded 2,594 total positive cases and 60 deaths since March 11, the date the state began compiling statistics. Since then, coronavirus infections statewide now number 172,955 with 4,803 deaths.

“It’s back, and it’s back with a vengeance,” Daniel Cole, director of the county’s Emergency Operations office, told the Board of Supervisors at their regular meeting Monday. He also said the more than 300 new cases don’t include the people who are asymptomatic, and are spreading the virus unknowingly.

“It’s not going anywhere until we get a vaccine, or the right vaccine,” Cole said. “As we get closer to the winter months and people are hibernating more maybe it will slow down a little bit. As long as we’re gathering in large groups it’s going to continue to spread.”

Cole said he had seen a statistic that indicates one in three people are carrying the coronavirus, some with no sickness and not aware they are infected.

Supervisors discussed the state of the pandemic in Panola only briefly. Gov. Tate Reeve’s ongoing mask mandate and restrictions on the size of public gatherings will not be enforced locally. Only Supervisor Earl Burdette defended the governor’s position, saying his years of military service taught him that the “chain of command” approach is vital in situations that involve the welfare of the general public.

“I feel we should follow the Governor’s orders and that includes everybody in the state,” Burdette said. “If we are going to pick and choose what we do, then we don’t have a democracy anymore, we are doing what we want to do. I don’t care if it’s church, Wal Mart, or Dollar General, I think we need to follow what the Governor says. If not, then I think you get into something that America wasn’t built on.”

The other supervisors made points that despite best intentions, some citizens are going to contract the virus and the resulting disease, and some are going to be very ill with a small percentage dying from its complications.

“The debate with the mask is like this,” said Supervisors Chad Weaver, “I believe if you come in this room and eighty percent of the people a mask and the other twenty don’t, I think you can all put them in the garbage can.”

“If you’re wearing that mask and putting forth a little effort to protect yourself and others, and you cough into your hand and you’ve got and don’t even know it, when you grab that door handle and the next man comes behind you thirty steps later and touches it and scratches his nose that mask didn’t do him any good or you either,” he said.

Some of the guidelines seem to contradict others, public officials have said from the beginning of the pandemic in the spring. “Despite what state officials say about social distancing and not going to church I don’t agree with that unless you going to include Wal Mart and Piggly Wiggly,” Cole said.

“You cancel church service then you go hang out at Piggly Wiggly with 180 people, I don’t know what you accomplish there,” Weaver said. “If you’ll watch most of the people you bump in the general public their mask is either on their chin or under their nose.”

Weaver also pointed out that many citizens will underlying health conditions have more options for everyday life activities since the pandemic began.

“I firmly that if you need to send somebody to Piggly Wiggly for you and you want to do church online I respect that by all means,” he said.

Board president Cole Flint said early attempts to coordinate local mandates with the Mayor and Board of Aldermen of Batesville and some of other other towns in Panola County resulted in “them throwing us under the bus” when there was public backlash at the supervisors’ first decisions to limit the number or people allowed to gather, whether at church, clubs, or retail businesses.

“I went to buy a permit at City Hall for some property I’m working on in town and I couldn’t even get into City Hall to get the permit that I had already paid for,” Flint said. “It’s a different situation now.”

Batesville City Hall has been closed for several days to general traffic, and customers with business to attend are waited on at the door.

The supervisors agreed, after the short briefing by Cole, that Batesville’s aldermen and the county’s board should meet and discuss any potential shutdowns, curfews, or public restrictions, similar to those put in place during the early months of the pandemic.

“At some point in time we have to communicate with one another,” Weaver said.