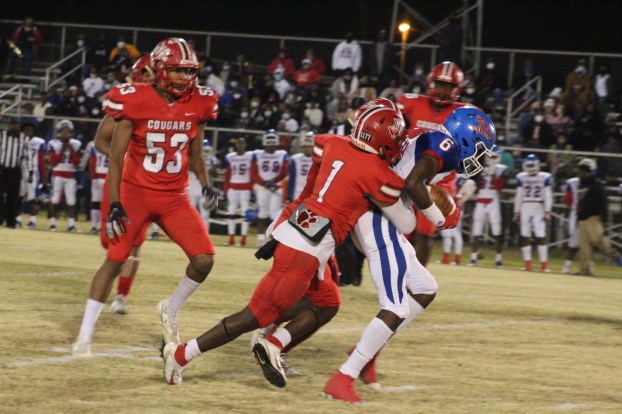 The North Panola Cougar defense held Noxubee County to 194 total yards, but lost the game on turnovers to the visiting Tigers.  (Glennie Pou)

Throughout the 2020 football season, Noxubee County had prided itself on defense and the ability to force turnovers that led to their success. Friday night the Tigers proved that defense wins games as they forced five turnovers, three of which were returned for touchdowns, in a 39-14 win over North Panola.

The Tigers (9-1) will now face Winona Friday for the North 3A State championship. North Panola ended its outstanding season at 8-2.

Noxubee County set the tone early as Marcardi Johnson stepped in front of a QD Walls screen pass and returned it to the Cougar four yard-line to set up the Tigers first score with less than a minute gone in the contest.

On the ensuing series, Jordan White picked off another Walls pass and raced 55 yards to extend the Tiger lead to 13-0 at the 9:01 mark of the first quarter.

North Panola withstood the early flurry and kept its composer by answering with a much-needed 58-yard drive capped off by a Walls five-yard run to make the score 13-6 at the 5:30 mark.

The Cougars would gain the momentum and take a 14-13 lead at halftime as Walls connected with Limekin Walls on a seven-yard scoring pass with 12 seconds remaining in the half after a successful two-point conversion from Walls to Rod Taylor.

Noxbuee County received the second half kickoff and moved the ball to the Cougar 17 where they faced a 4th-and-10. After a timeout Tiger head coach Teddy Young went into his bag of tricks and pulled off a double reverse touchdown pass from wide receiver Vernorrious Chaney to quarterback Chrishard Rupert with 10:33 left in the third as Noxbuee regained the lead at 19-14.

The backbreaker came for North Panola in the following drive as the Cougars were looking to cash in another score,but Anthony Little changed all of that by picking off a tipped pass from Walls and racing 94 yards into the Sardis night to give the Tigers a 25-14 advantage.

Noxubee County would ice the game in the fourth quarter with a pair of touchdowns including a 55-yard Pick-6 by Shunterrion Sherrod with two minutes remaining.

North Panola out-gained Noxubee County 249-194 in total yardage and held a 15-12 advantage in first downs. The Cougars finished with 86 yards rushing on 27 carries and 163 yards through the air.

Walls finished with 13 carries for 42 yards rushing while Alex Gross followed with 29 yards on six carries. Carl Robinson accounted for 14 yards on the ground to go along with four receptions for 97 yards. Edwards had three catches for 32 yards, Limekin Walls added two for 17 while Demartius Wright and Daveon Williams had one catch each.