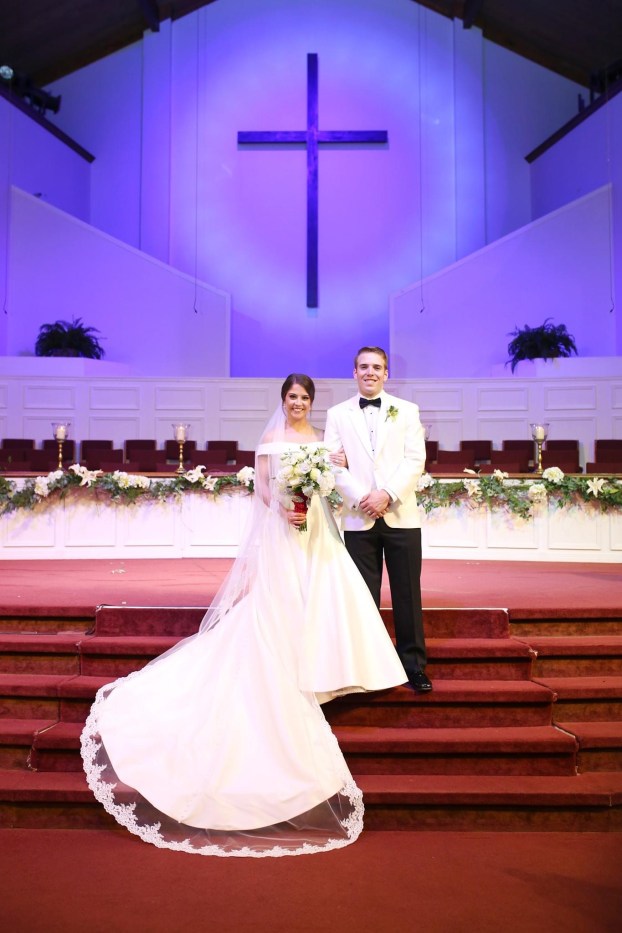 The ceremony was officiated by the Reverend Dr. Bryant Barnes of Columbia. Nuptial music was presented by Carolyn Sanson, pianist and Carolyn Magnini, organist.  The candlelight service was set with a colonnade of towering hurricanes along the aisle and the altar rail adorned with candles and a garland of hydrangeas, lilies, and roses.

Given in marriage by her brother, William Scott Phillips, Jr., the bride wore an ivory soft satin Mikado A line bridal gown with pockets and off the shoulder straps. She wore an opal and crystal embellished belt with a detachable train. She wore an ivory Allure Bridal veil trimmed in lace.

Madison carried a bouquet of white hydrangeas and moondial roses.  It was accented with garden ranunculus, dusty miller and green hypericum berries. It was hand tied and wrapped with satin ribbons. It was also wrapped with her father’s red tie and pinned with her grandmother’s brooch. Special memory charms of her grandfather, David Bryan, and her father, Scott Phillips, were attached to her bouquet. Her bouquet was provided by Blossom’s Florist in Batesville.

The ring bearer was Forrest Charles Phillips, IV.  He wore an adorable white and ecru romper that featured a square collar trimmed with ecru lace. He carried a white monogrammed initialed pillow with the wedding date.

Following the ceremony, an elegant reception was  held at The Lyric Theater in Oxford. Guests feasted with a diverse buffet served from ornate family silver accented with topiaries and rose orbs.

The dance floor was transformed into a fairytale ballroom with a floral chandelier amid twinkling lights and towering water filled cylinders topped with hydrangeas and roses.

Food and decorations were provided by Grande Design of Cleveland. The bride and groom’s cake was provided by Decorator’s Delight-Patricia Farrish of Batesville.

The bride’s cake was a round ivory, four tiered cake with individual layers consisting of white, chocolate, and strawberry topped with buttercream icing. White roses and baby’s breath adorned the top and side of the cake.

The groom’s cake was a square carrot cake with cream cheese icing with an initialed monogram on top of the cake.

Music was provided by Juke Joint Allstars of Memphis. The couple left the reception with a crowd waving Ole Miss pom poms.

On the eve of the wedding the bridegroom’s parents hosted a rehearsal dinner at The Diamond Club at Swayze Field on the campus of The University of Mississippi.

Following a honeymoon in Jamaica, the couple has made their home in Oxford.  Madison is completing her Nursing Degree at the University of Southern Mississippi, and Henri is a catcher for the Philadelphia Phillies organization.

Family on hand for last Saturday’s event at FBC to honor the retiring minister of music included (from... read more