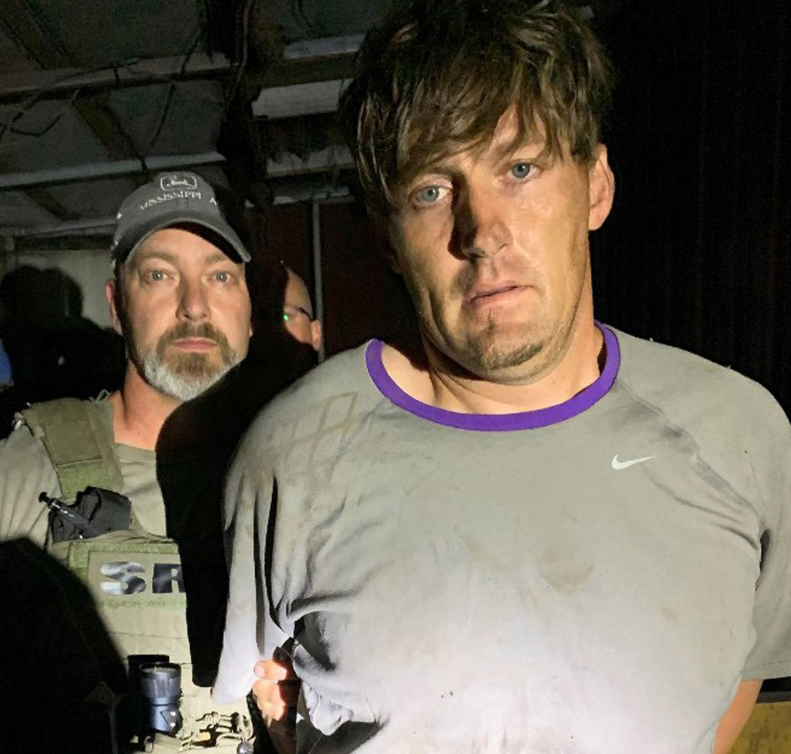 Richard Willis was found hiding in a shed near Pope on Sept. 7 and taken back into custody. He had escaped three days earlier from the Union County Jail. A local woman has been charged with aiding and abetting his escape. (Courtesy of MDOC)

Sheriff Shane Phelps said last week’s capture of an escaped prisoner has resulted in multiple charges for a Panola County woman including aiding and abetting, and drug possession offenses.

Tema Wilson Tutor, 30, of 2451 Crouch Road, has been charged in Union County with abetting the escape, and will also face drug possession charges in Panola County after local investigations found narcotics while searching her residence.

She originally told investigators she had no contact with a fugitive who was thought to be in the area, but later admitted her role in his escape. Deputies knew from reports she was an acquaintance of the convicted burglar, and suspected she had picked him up from New Albany and driven him to this area.

Richard Willis, 34, was captured after three days on the run, last Monday, Sept. 7. He was hiding in a shop building at a residence in Pope. Phelps said Panola County’s Task Force officers worked closely with the U.S. Marshals Service, the Mississippi Department of Corrections’ Special Response Team and Corrections Investigation Division, and the Mississippi Highway Patrol to track and locate Willis.

Willis was arrested late Monday, and taken into the custody of MDOC. He has been taken to the Central Mississippi Correctional Facility and will face additional charges. He was serving time for a residential burglary in Tallahatchie County and was on probation in Yalobusha County from a methamphetamine conviction.

He had reportedly been moved to New Albany from a prison in Rankin County to participate in an inmate work program, and had been a trustee inmate in Union County.

An area newspaper there reported he was last seen late Friday night watching television with other trustees. Authorities later learned Tutor drove him to Panola County and apparently dropped him off somewhere in east Panola, close to Lafayette.

Panola County deputies became involved Saturday, Sept. 5, when officers from the Union County Jail alerted local authorities Willis had escaped from custody in New Albany. Deputies there knew Tutor from visiting days, and quickly suspected she had helped him make a getaway.

Phelps said since Willis was known to have association with the local woman, deputies suspected he would attempt to hide in Panola County. The sheriff put together a team to track Willis in east Panola County when a cell phone he had been smuggled in prison indicated he was somewhere around Hwy. 315 South.

Phelps said search teams using drones and other detection equipment were unable to find the escapee, and the search was suspended Sunday until more information could be gathered.

On Monday, Willis broke into a house in the Orwood community, about a mile from the Panola-Lafayette line, just off Hwy. 315, according to homeowner Lula Turner.

Turner, 77, said she was taking a nap in the afternoon when she awoke to find a man in her house.  “He said he was thirsty and could he please have some water, so I got him some,” said Turner.

“I was never afraid of him a minute because he said he had broke out of prison, and just needed to take my car. He had reached through my screen door while I was asleep and opened the lock,” Turner said. “He told me he was going to have to put me in the bathroom, so I went, but he never laid a hand on me. He tied the door up with a rope, but he didn’t tie it tight and it didn’t take me long to work it off.”

“When he put me in the bathroom I just started to pray real loud because there wasn’t anything left to do then. I felt a little bit sorry for him because he said he knew they were going to take him back to prison and he just wanted to go see his kids one more time before they did. I prayed for him in that bathroom and I’ve been praying for him every day since then,” she said.

Willis disabled her telephone, took the keys to her 2018 Hyundai Sonata and left.

When she knew he was gone, Turner walked to a neighbor’s house and police were called. The car is equipped with a tracking device that allows it to be turned off remotely, and officers soon had a location on the car. They found it parked behind Spring Hill M.B. Church in Pope.

“I knew pretty soon after we found the car that he would be hiding in one of two places near there and that’s where we found him,” said Phelps. He said the fugitive offered no resistance and no one was injuring during the capture.

Turner said her sons, including a physician who lives in Jackson, asked her to stay at one of their houses after her ordeal, but she refused. “I can pray at my house just like I can their house, so I told them I’m staying home,” she said, although she did allow her children to install a security alarm.

“I’m strong with the Lord, have been for more than fifty years. I had just told Him the other day that whenever He was ready for me, I’m ready to go, but I wasn’t expecting anything like this,” the former Water Valley School District employee said. “I’m going to keep praying for that man because I think he might be special needs.”

Phelps said that although Willis apparently told Turner he wanted her car to visit his children, investigators learned that those children live in Pontotoc County and he had not gone in that direction.

Phelps said the three-day ordeal was serious, although no one in Panola County seemed to be in any danger. “They had told us he wasn’t known to be violent, but we take it very seriously because we never know for sure what we are dealing with and the public’s safety has to come first,” he said.

“This is a good example of how law enforcement agencies can come together when we have communication and how quick this person was able to be brought back into custody,” Phelps said. “Working with other departments and agencies is vital to good law enforcement in our county.”

Cutline: Richard Willis was found hiding in a shed near Pope on Sept. 7 and taken back into custody. He had escaped three days earlier from the Union County Jail. A local woman has been charged with aiding and abetting his escape. (Courtesy of MDOC)