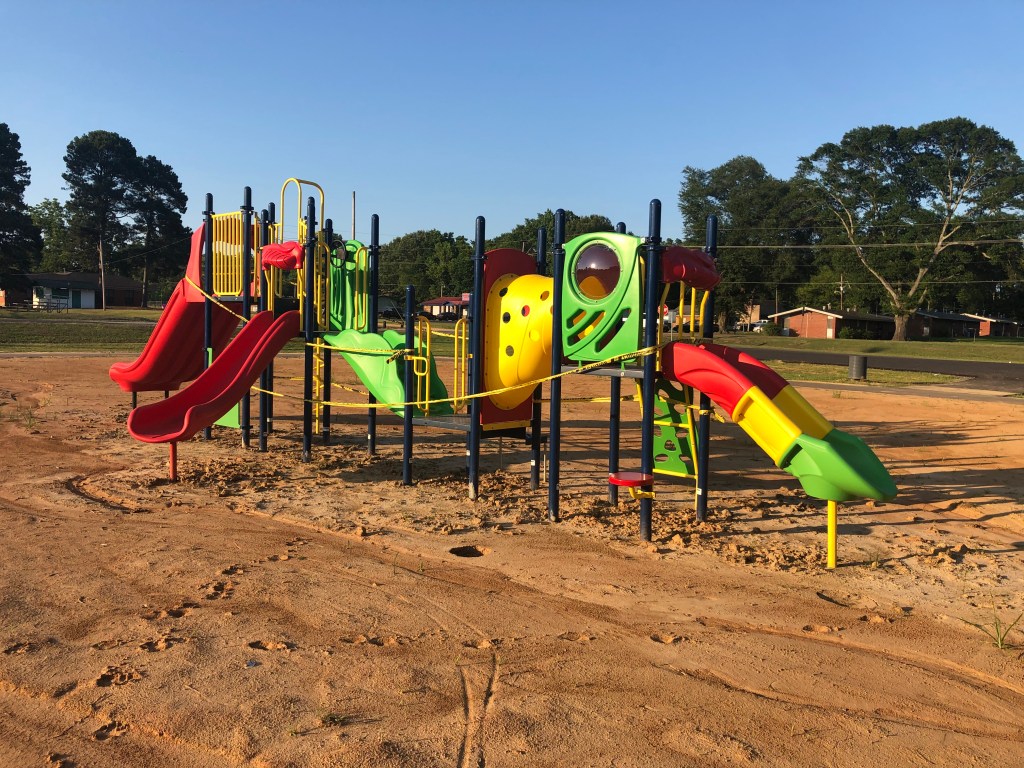 Sardis town aldermen have voted to not pay invoices of nearly $30,000 for this playground equipment installed at the town’s walking trail  on Hwy. 51. They say the mayor used a city-issued purchase order for the equipment and the installation without their consent, and without obtaining competitive bids.

Sardis Mayor Lula Palmer this week was again at odds with the town’s board of aldermen, this time an invoice for almost $30,000 being the point of contention between the town’s officials.

At Tuesday’s regular board meeting aldermen voted 5-0 to approve the payment of the town’s claims docket – all the invoices, payroll, and all other expenditures common to a municipality – except for three line items related to the purchase of playground equipment recently installed at the walking track and park area built last year.

BYO Recreation LLC submitted two invoices – one for $20,430.67 and the other for $1,209.60 – for playground equipment. The other line item was for $8,325 submitted by National Playground Construction, Inc., for installation of the new equipment.

Aldermen denied the payment of those invoices because they had not voted to allow the purchase, and had authorized the mayor, or any other town official, to seek quotes for the equipment in question.

State purchasing laws require a municipality to obtain at least two quotes, or bids if advertised, before approving expenditures for any goods or services that cost more than $5,000. There are allowances for emergency situations, and some leeway for items that are “single-source” and can’t be quoted by multiple providers.

Aldermen are concerned about the mayor’s decision to initiate the purchase, and apparently only learned about the playground item after installation was almost completed. Beside the fact the board believes the nearly $30,000 paid is exorbitant for the equipment, aldermen are aware that state laws require individual board members to personally reimburse a municipality when a purchase is made without following procedure.

Board members are also unhappy that the installation did not include a special safety surface, like mulched wood chips or ground rubber, that is the norm for modern playgrounds.

The new equipment is located at the town’s walking trail on Hwy. 51, near the Green Hill area. The walking trail was built last year, in part, with a grant from the Mississippi Department of Wildlife, Fisheries, and Parks. The board of supervisors also provided several thousand dollars of dirt and gravel for the project and helped with the construction of the paved parking area adjacent to the walking trail.

Because the work was completed and a valid purchase order obtained, the equipment vendor and the installer must be paid for the goods and services provided. The mayor maintains the board voted to purchase the equipment, but gave no explanation why she did not follow the bid process.

The aldermen asked city attorney Thomas Shuler to contact the mayor’s bonding company about the situation, and are apparently adamant the invoices will not be paid from the town’s general fund, nor from their personal accounts.

BYO Recreation has the following posted on its website:

Beyond Your Ordinary (BYO) Recreation has been serving the nation’s playground and recreation needs since 1999, offering Beyond Your Ordinary customer service and products. We are one of the oldest and largest nationwide distributor of playground equipment in the United States, and we only distribute high quality, made-in-the-USA products from the best, most experienced manufacturers.

Both BYO Recreation and National Playground Construction have the same address in St. Augustine, Fla.

Driver License Stations will have new schedule starting next…