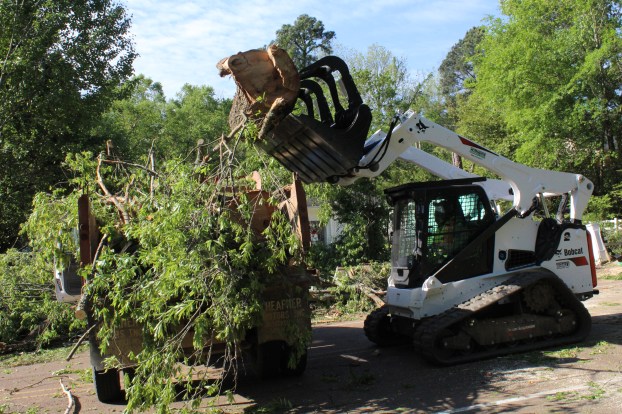 The City of Batesville has changed its policy on curbside pickup of brush and cut up trees and limbs. Street Department trucks will now collect any cut debris, no matter who performed the service.

Before the change at last week’s meeting of the Mayor and Board of Aldermen, the city would only pickup up brush and limbs cut by homeowners and placed on the roadside.

Any work done by professional companies, or anyone paid by homeowners was required to be removed by those workers, often adding hundreds of dollars to the costs of having trees and large limbs trimmed or removed.

Public Works director David Karr asked the board to make the policy change. He said a previous board, at the request of city employees, had set the guidelines, but the burden of debris removal was not an expense homeowners should cover when the work usually improves the looks of their property.

“If the taxpayers of the city paid their hard earned money to get somebody to cut a tree and they can get it to the street then we should pick it up,” Karr said. “There’s no reason for them to pay a lot of extra money when we have the equipment now and we need to use it.”

He told the board a vote to amend the policy would allow some property owners to go ahead with tree work that needs to be completed to protect houses and other structures.

Homeowners should contact the Street Department, or have their contractor call, to make arrangements for pickup and get instructions about what size to cut trees into, and how to stack it on the streets.

Karr said homeowners who want to avoid extra costs for debris removal can expect a longer wait before brush and limbs are removed, especially with the city working  skeleton crews because of COVID-19, and a general backlog of collections due to several storms and high winds in April that toppled trees and blew limbs in yards across the city.

No new reported cases in Panola; state numbers up

Today MSDH is reporting 227 new cases of COVID-19 in Mississippi and 11 new deaths. Thirty-one of these new cases... read more