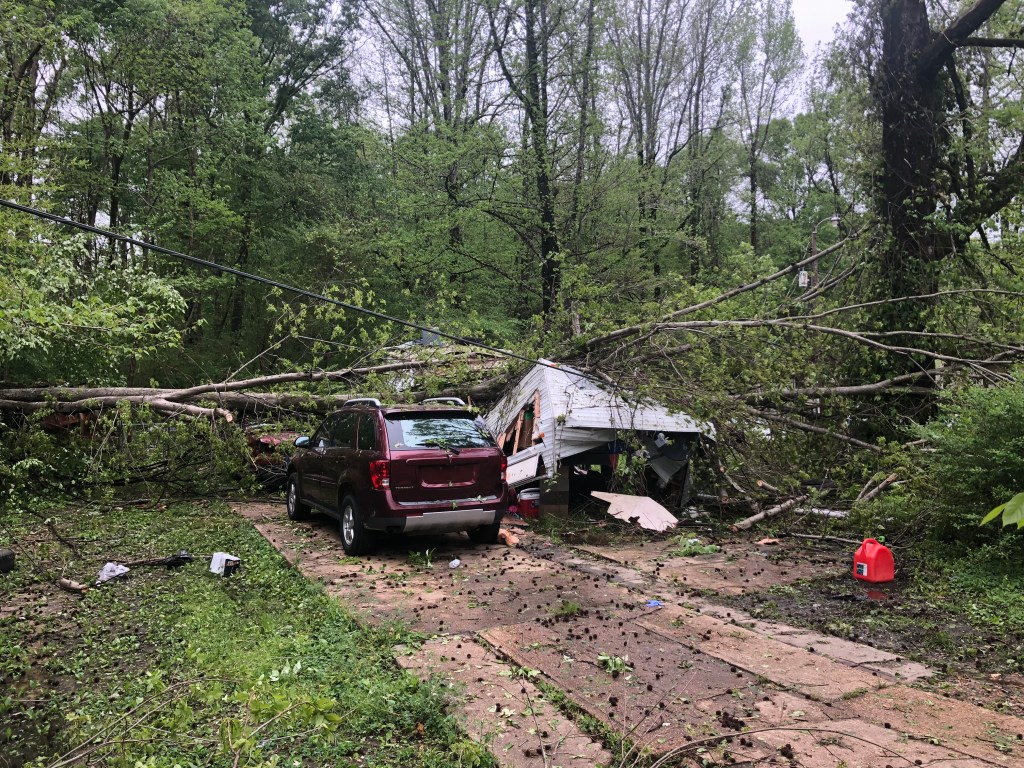 A large tree fell on this residence on Ramsey Circle during Sunday night’s severe thunderstorms and high winds, claiming the life of a young woman.

A Panola County woman who died when her home was crushed by a fallen tree was one of 11 confirmed deaths in the State of Mississippi yesterday when severe thunderstorms and tornados made a deadly Easter Sunday.

Emergency Operations Director Daniel Cole reported the death at the Board of Supervisors meeting at the Batesville Courthouse Monday morning.

Cole said it appeared a young couple were living in a camper-style trailer located on Ramsey Circle off Hwy. 51 between Batesville and Sardis. He said the woman’s boyfriend and one of their dogs were able to escape, but firemen and county emergency workers had to cut away limbs and debris to reach the deceased.

Mildred Manning, 40, died at the scene from her injuries according to reports. One of the couple’s dogs was also killed.

Sunday began with heavy flooding around the county, especially in the Como area. An apartment complex had several units and residents’ vehicles take on water. Cole said inmates from the county jail bagged sand and deputies helped residents attempt to keep water from their apartments.

“I’m saddened that we had a death in Panola County, but there was nothing we could do,” Cole said. “I will tell you that a lot of people did a phenomenal job all day. Our fire services worked late into the night and the sheriff  had people staying late and coming in early.”

Preliminary numbers indicate that Panola County had 44 roads blocked with trees and limbs, and some are still being cleared this morning.  Cole said two businesses in the north part of the county were damaged, and 13 homes had trees on roofs. Four roads and two bridges were completely washed away.

Those numbers do not include any damaged businesses or houses in the city limits of Batesville, Cole said. Any home or business owner inside the city may report damage to Cole to be included on the official report that will be included with the application for federal and state disaster relief for Panola County and local homeowners.

Cole reminded the board that he spent considerable time collecting photos and detailed damage reports from storm damages in January, but disaster funds went to other parts of the state. “We don’t know where the disaster funds will be going and all we can do is send the best information possible and wait,” he said.

Besides the considerable wind and flooding damages in Batesville and throughout the county, road and bridge repairs will also be costly, Cole noted.

The supervisors and the Batesville aldermen will be getting further updates later this week.

The Associated Press has reported  the severe weather that swept across the South killed at least 19 people and damaged hundreds of homes from Louisiana into the Appalachian Mountains. Many people spent part of the night early Monday sheltering in basements, closets and bathroom tubs as sirens wailed to warn of possible tornadoes.